Spotted turtles are a very small turtle species that usually reach a maximum shell length of 4.5 inches. Hatchlings have a nearly circular shell that is roughly 1 to 1.25 inches long. The top of their shell is smooth and does not contain obvious growth ridges, especially as adults. Turtles are typically black or brown with round, yellow spots. The bottom of their shell is yellow or orange, typically with a black blotch on each scute.

Spotted turtles become active in the spring and can often be observed moving around when the water temperature is cold. Their activity peaks in April and May, then activity drops during the warmest parts of the summer. In extremely warm weather, these turtles may burrow into leaf litter, muskrat burrows or other aquatic habitats to stay cool. They do like to bask along the water banks or even on logs, but when they are surprised, they will dive back into the water and bury themselves in the mud.

Spotted turtles are often preyed on by raccoons, especially when they are on land. Winter dormancy starts in late summer or fall after the turtles have returned to their aquatic habitats.

Spotted Turtle at the Akron Zoo 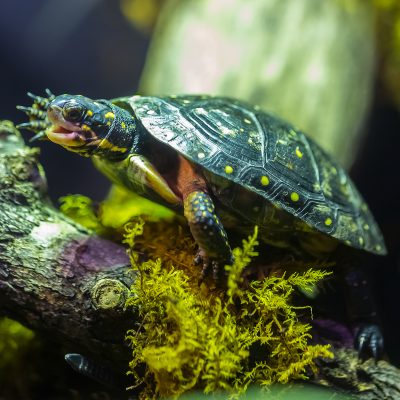 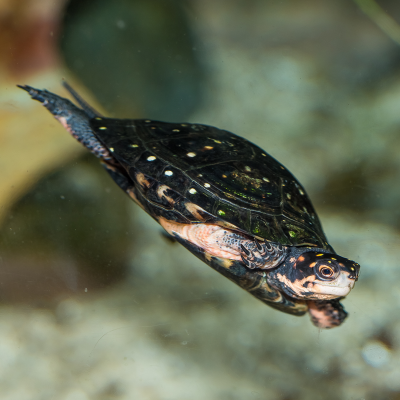 The zoo’s spotted turtles can be found in Curious Creatures, located inside our Komodo Kingdom building. 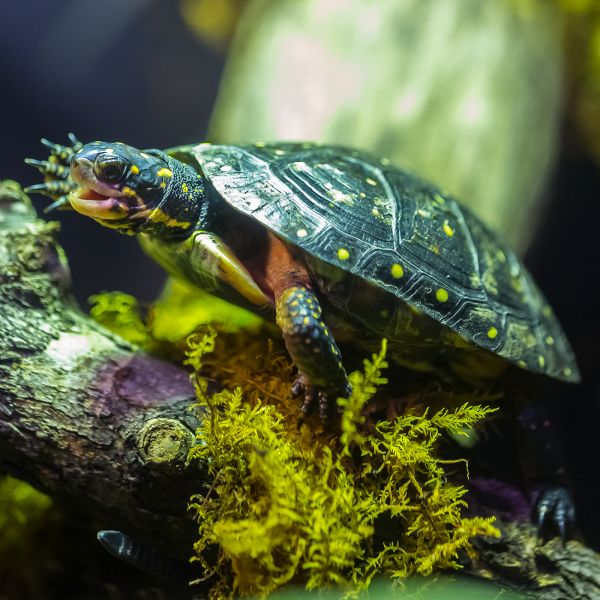 The number of spots on the spotted turtle is variable. Hatchlings typically have one spot per scute, while adults can have 100 or more spots per scute. Adults may also have no spots whatsoever due to wear over the years, or even just individual markings.

Spotted turtles are found in a variety of wetland habitats. Anything area with shallow water and a soft bottom, including wet meadows, small ponds, streams, swamps, vernal pools, and wet forests, will fulfill their needs.

Spotted turtles are found in North America in two different ranges: the eastern seaboard from Maine to Florida and the Great Lakes.

Spotted turtles are considered “endangered” by the IUCN Red List. It is believed that the species has declined more than 50% in the last 25 years, mostly due to habitat loss from degradation, invasive plants, and fragmentation. These animals are not very adaptable and do not easily adjust to new habitats, so habitat loss is a huge issue for them. These turtles are also facing threats due to pet trade, traffic mortality and climate change. The animal is listed as a Threatened animal in Ohio.