Komodo dragons are the largest lizards in the world. They can reach up to 10 feet in length and can weigh 150-300 pounds.

Adult komodos are mostly black, green or gray with patches of yellow-brown or white. They have a large, powerful tail which they will use for defense. The yellow color of their long, forked tongue and their deadly bacteria reminds people of mythical dragons that spit fire. Males and females look similar, other than a noticeable size difference with males being larger.

Komodo dragons are generally solitary animals, except during the breeding season. Males will maintain and defend a territory or approximately 1.2 miles, depending on the size of the dragon. Feeding ranges will extend further and may be shared with other males. The dragons maintain burrows within their core ranges which they use for body temperature regulation.

They are also very good swimmers. They will swim about ¼ of a mile from island to island for new food and new territory.

Despite their size, komodos are fast-moving, good climbers and like all monitors they are good swimmers. They can run about 11 miles per hour, which is about as fast as a human. However, they do not chase their prey. They use their sense of smell, hearing and sight to detect an animal nearby.

Like most reptiles, komodos have an excellent sense of smell. They can use their long tongues and the Jacobson’s organ on the roof of their mouths to detect rotting carrion from almost seven miles away. Their tongue is 12 inches long and they can taste the scent of an animal hours after it has left the area.

Komodo Dragon at the Akron Zoo 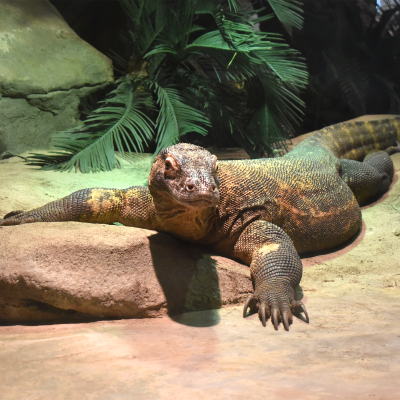 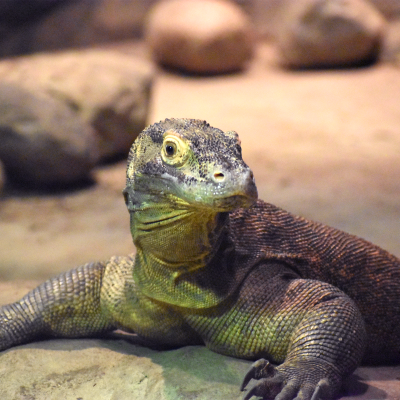 The Komodo dragon lives in the Komodo Kingdom building at the Akron Zoo. 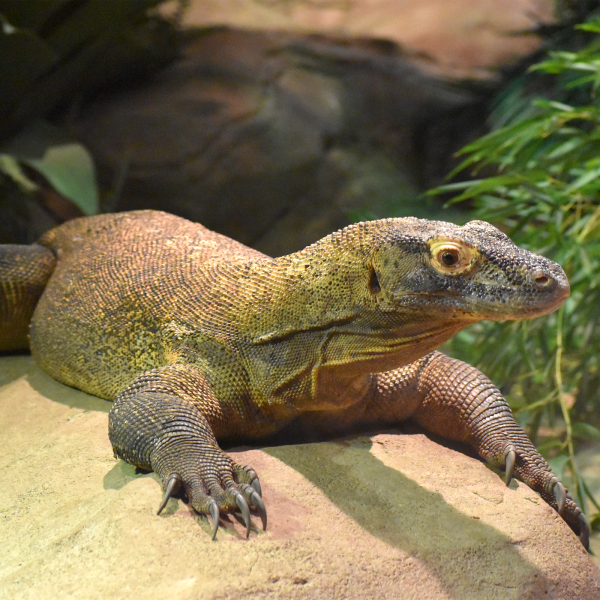 For the first few years of their lives, they spend much of their time up in the trees, to avoid being eaten by adult komodos. Young komodos will roll in buffalo dung as a biochemical defense. Adult dragons do not like the smell of the dung and will not attempt to make a meal out of anything that smells like it.

These lizards inhabit seasonally arid grasslands, savannas and monsoon forests, usually in the lowlands. Their habitat is very harsh with steep slopes and little available water most of the year. The average annual temperature on Komodo Island is 80°F.

Komodo dragons are native to the four southeastern islands of Indonesia: Flores, Gili Motang, Komodo and Rinca. As of the 1970s, they have also been found on the island of Padar.

The primary prey for adult dragons is the Sunda deer. They also feed on birds, snakes, fish, crabs, snails, small mammals, pigs, water buffalo, eggs, wild horses and younger komodos. They can eat prey that is up to 5 times their own size such as a water buffalo that weighs about 2,000 pounds. They are also scavengers and will eat carrion (dead animals).