Gibbons are a species of lesser apes or small apes. The Northern white-cheeked gibbons usually stand between 18 and 25 inches tall. This species has extremely long arms and legs, which are needed for their arboreal lifestyle, and long, dagger-like canines.

When traversing the tree canopy, gibbons use a specialized form of movement called brachiation. Their hands form a loose hook around branches, allowing them to swing through trees using a hand-over-hand motion. Although gibbons in their native habitat spend most of their time in the trees, they have been observed to spend more time on the ground in zoos.

Gibbons live in small family groups made up of a mated pair and their young offspring. Grooming is an essential component of social interaction as well as play with infants.

This species tends to be co-dominant, with females often playing a larger role in food acquisition.

Each morning, mated pairs will perform a vocal duet that enables other gibbons to recognize their territory. At first, both males and females appear to “warm up.” Then the male and female alternate, with the male’s call typically ending the sequence. Along with calling, gibbons often exhibit acrobatic behavior.

White-Cheeked Gibbon at the Akron Zoo 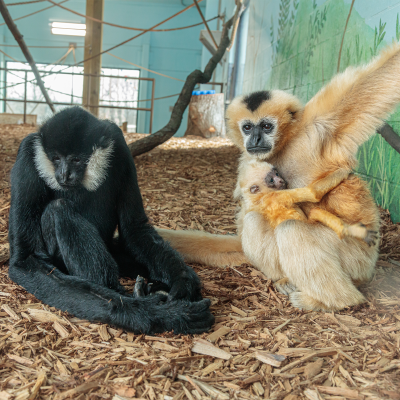 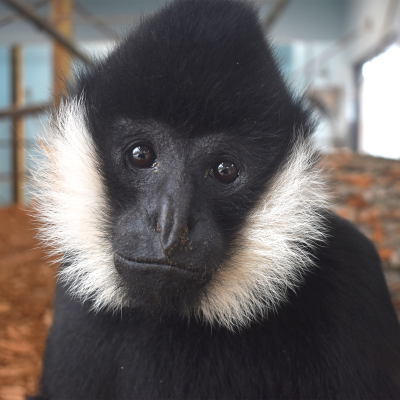 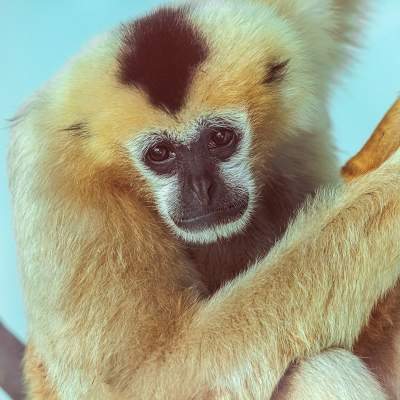 Our white-cheeked gibbon family can be found in Lehner Family Foundation Wild Asia. 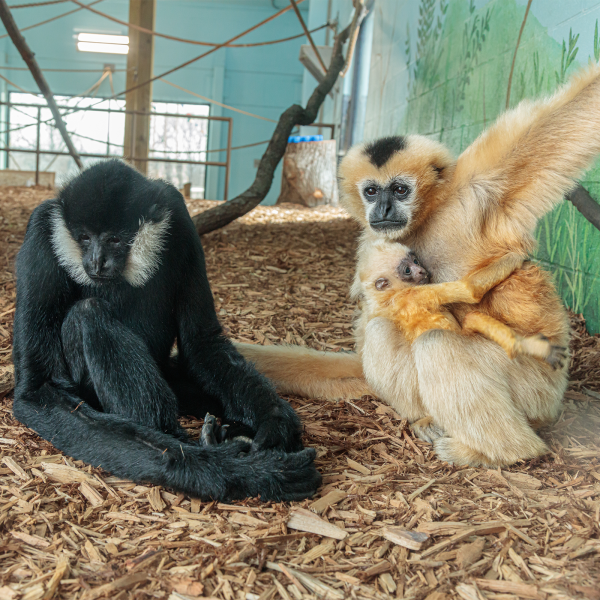 All northern white-cheeked gibbon infants are born with blonde fur like their mothers. By age two, their coloration turns black. It is not until the offspring reaches sexual maturity at 5 to 7 years old that females will change back to blonde while males stay black.

White-cheeked gibbons live in evergreen tropical rainforests and monsoon forests at elevations between 900 and 1900ft. They spend most of their time in the forest canopy.

White-cheeked gibbons are native to Laos, Vietnam and southern China.

In their native habitat, white-cheeked gibbons will eat leaves, flowers, shoots and insects. During the wet season, flowers are most plentiful. Leaves become the most important food source during the dry season. Because the gibbons are so agile, they can easily move in search of food.

The northern white-cheeked gibbon is considered “critically endangered” by the IUCN Red List, and their numbers have declined by 80% or more over the past 45 years, primarily due to habitat loss and poaching.

The Akron Zoo has partnered with Pu Mat National Park in Vietnam, which is home to one of the largest populations of gibbons in the world. We were the first zoo in North America to enter the program through which scientists have been able to monitor the behavior of gibbons in their native range. The goal of the partnership is to protect white-cheeked gibbons from extinction.