Traditionally, the tiger has been considered to be a single species with five living subspecies. While all tiger species are able to interbreed, Sumatran tigers have been isolated since Sumatra was cut off from the mainland of Asia about 12,000 years ago. Because of this isolation, Sumatran tigers have a unique DNA sequence not found in other tiger species, causing researchers to speculate that the Sumatran is a separate species from the other four tigers.

The Sumatran tiger is the smallest tiger alive today. Its dark red-orange fur is also the darkest colored of all the tigers, with black stripes and cream-colored patches. Males are less than 8 feet long from head to tail and weigh about 265 pounds. Females are less than 7 feet long and weigh about 200 pounds. In their native habitat, tigers are solitary, and each individual has their own territory to defend. Territory size depends on the available food, water and shelter in a given space. Males will usually claim a large territory using urine and droppings to scent mark the perimeter. Females are usually allowed to enter these territories, but not other males.

Sumatran tigers are nocturnal hunters who are equipped to take down a wide variety of prey. If the prey is more than half the tiger’s weight, the tiger will bite the prey’s throat, but if the prey is smaller, the tiger will bite the nape of the neck. Tigers will then drag the kill to dense cover to eat. When tigers make a large kill, they will eat their fill, then cover the kill with leaves and grass to keep it safe until the next day.

If hunting has been unsuccessful, some tigers are forced to hunt during the day. They will hide in the dense jungle to ambush their prey, using their stripes as camouflage. Because it may take several attempts to a successful kill, tigers eat on a “feast or famine” regime.

If a tiger wants to share a kill with other tigers, it sends out a roar that can be heard for about one and a half miles. If a tiger does not want to share its kill, it will snarl or growl at other tigers that come close. The tiger is considered to be a keystone species because it helps to keep the populations below it in the food chain in balance.

Sumatran Tiger at the Akron Zoo 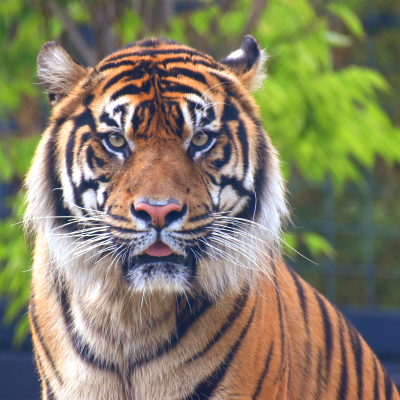 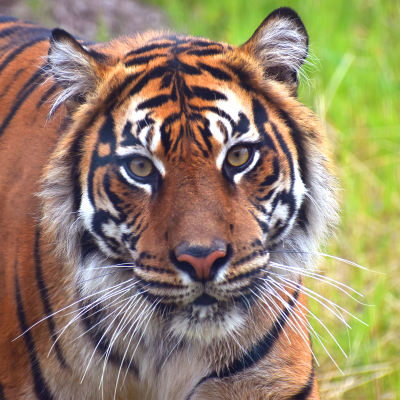 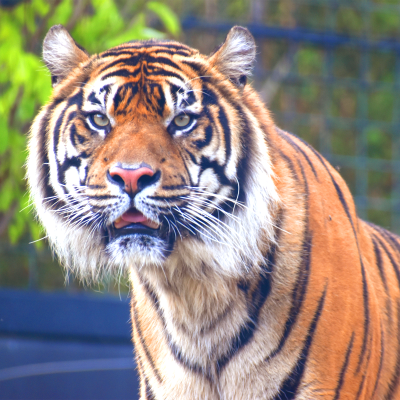 The Sumatran tigers can be found in the Lehner Family Foundation Wild Asia area. 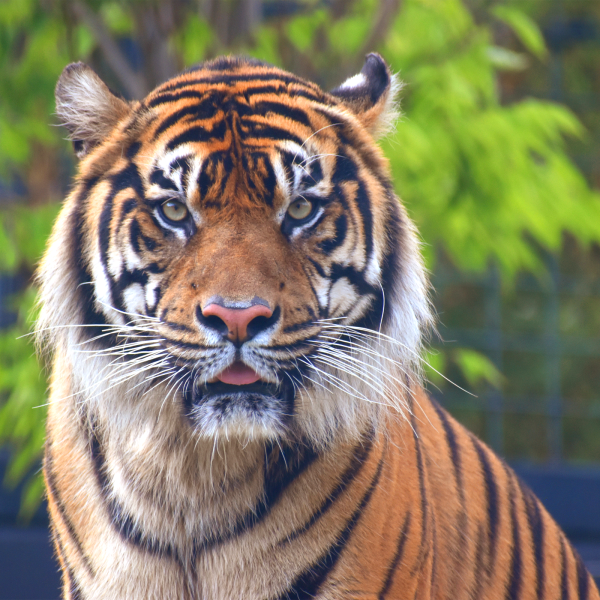 Sumatran tigers have the most stripes of any tiger species. These stripes help to conceal the tiger as they stalk their prey. Similar to a fingerprint, no two tigers have the same stripe pattern.

Sumatran tigers can only be found on the Indonesian island of Sumatra. They live primarily in and around the country’s national parks.

Sumatran tigers are carnivores who prey upon creatures such as muntjac, primates, wild boar and small mammals.

Sumatran tigers are listed on the IUCN's Red List as “critically endangered.” The population in their native habitat is heavily fragmented and is estimated to range between 400 and 500 individuals. Unfortunately, even without further loss of the tiger population, the present numbers are so low that genetic diversity is going to be reduced.

Conservation efforts have been enacted throughout the tigers’ range and the Association of Zoos and Aquariums (AZA) has also established a Species Survival Plan (SSP) for the tiger.

The Akron Zoo supports the International Rhino Foundation, an organization that provides ongoing conservation efforts in Sumatra that protect the Sumatran rhinos, tigers, primates and birds in critical areas.