Straw-colored fruit bats are one of 60 bat species often referred to as "flying foxes.” They get this nickname from their dog-like faces, large eyes and widespread ears. Flying foxes are members of a subfamily known as “megabats,” or Megachiroptera, which are large, frugivorous bats. Unlike smaller bat species, megabats have simple external ears and cannot use echolocation to search for food. Instead, they use their eyesight and sense of smell to find fruit, which they grab and hold with their large thumbs while they eat.

Straw-colored bats are one of the larger species of fruit bats, typically weighing 8-12 ounces. They measure 5-8 inches in length and their wingspan is 30-36 inches. Their wings are long and narrow, allowing them to fly long distances and not expend too much energy while they are flapping. These bats’ necks and backs are a yellowish-brown color, while their undersides are a tawny olive or brownish. They have pointed snouts, large eyes, and no facial markings. Males also have a straw-colored ring around their necks and tend to be larger in size compared to females.

This species of bat is a very social roosting species. They tend to roost in groups of 100,000 to 10,000,000 individuals! Even though they feed at night, they can be active during the day as they move about the roost. At night the colony will leave in small groups to search for food, which is usually found in nearby forests or plantations.

Food is located by sight and smell, and bats will often use the same food sources from season to season. When this food becomes scarce, these large colonies will migrate to a new location where food is more abundant.

Communication in this species has not been well researched, but these animals are reported to be quite noisy, often chattering to one another in their roosts. Because they roost in such large groups, individuals also come into physical contact frequently. It is likely that due to these circumstances, straw-colored bats use both acoustic communication and some sort of tactile communication to talk to one another. 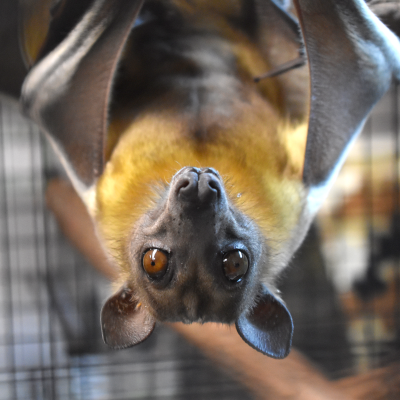 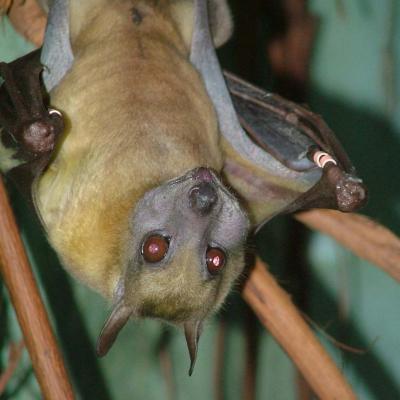 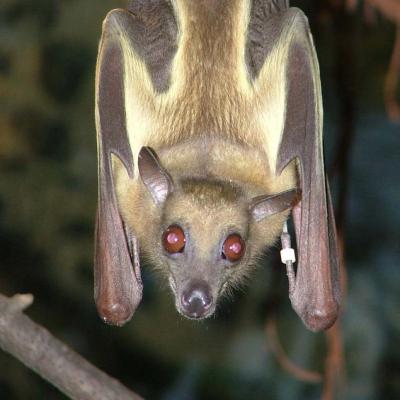 The straw-colored fruit bats share a habitat with our Rodrigues fruit bats in our nocturnal animal building, located in Legends of the Wild. 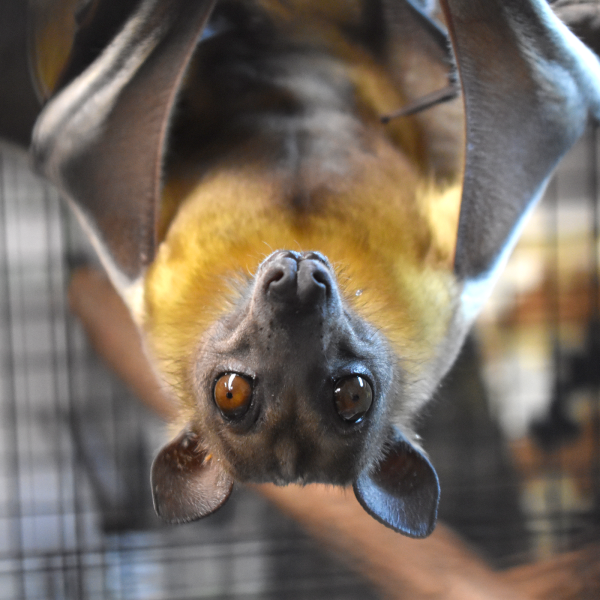 Over 8 million straw-colored fruit bats migrate to Kasanka National Park in Zambia in November every year. This migration is the largest mammal migration in the world.

Straw-colored fruit bats live in tropical forests, savannas and areas that contain many trees and a sufficient supply of food. They prefer to roost in trees during the day but also can be found in lofts or caves.

The straw-colored fruit bat is widespread throughout Africa. They can be found in most forests and savanna zones south of the Sahara and Madagascar.

These bats are frugivores. They will crush ripe fruits in their mouths, suck out the juices, then spit out the pulp and seeds. This species has also been observed chewing on soft wood, most likely for the moisture, and eating flowers. Because of their diet, straw-colored fruit bats play an important role in pollination and seed dispersal.

Straw-colored fruit bats are abundant, with no apparent threats to their population at this time. However, they can be quite harmful to agriculture, since they live in very large colonies and roost near their food source. It is unclear whether their usefulness as pollinators and seed dispersers outweighs the damage they do to crops and plantations. Due to their abundance, these bats are heavily harvested as bushmeat in West and Central Africa.