Speke’s gazelles are the smallest species of gazelle. They are named after the English explorer John Hanning Spekes, who searched for the source of the Nile in the Horn of Africa during that time period. When fully grown, these gazelles weigh roughly 33-35 lbs., and stand 1.5-2 ft. at the shoulder. Males are larger than females and may weigh as much as 40 lbs. Speke’s gazelles have mostly brownish-fawn coloring with a white underbelly. Dark black stripes along each side separate these colors. Both males and females have slightly “S” shaped horns which may be up to 10 in. long. The males are typically larger than the females with longer and thicker horns.

Speke’s gazelles are social animals who live in herds of 5-12 animals. When food is scarce, these herds may merge to create groups of up to 20. There are two types of herds formed by these gazelles: breeding herds and bachelor herds. In a breeding herd, one dominant male controls a harem. Females decide where to graze while the male tries to keep the females within his .5 to 1.5 miles territory. Males will mark their territory by urination, defection and a scent from their preorbital gland (located where our tear ducts are). Speke’s gazelles also have three to five nasal folds which they can inflate and enlarge when feeling threatened. This creates a hollow chamber that amplifies the gazelle’s calls to a loud snort, sneeze or honk. These amplified calls may be used to communicate dominance.

Speke's gazelles are crepuscular, meaning they are most active at dawn and dusk. Like most animals in this hot climate, they rest throughout midday. Predators include cheetahs, lions, wild dogs, hyenas, leopards and pythons.

Speke's Gazelle at the Akron Zoo 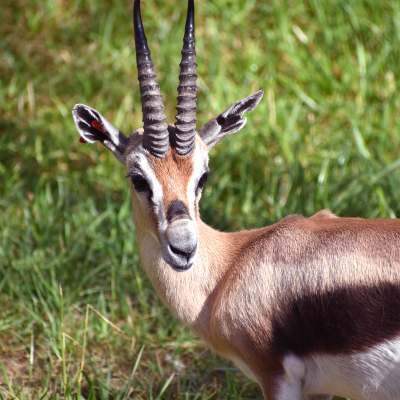 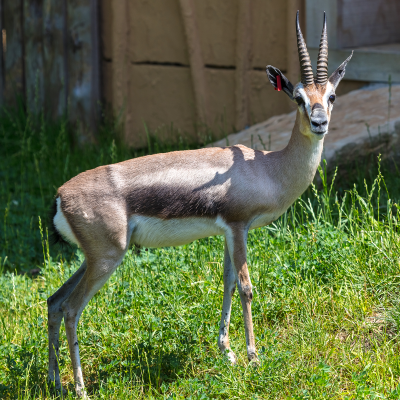 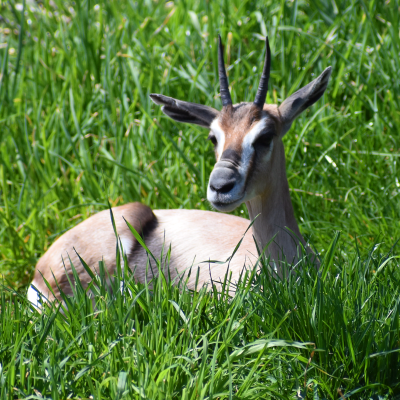 Our Speke’s gazelles can be found in the Landon & Cynthia Knight Pride of Africa area. The gazelles share their habitat with white storks and guineafowl. 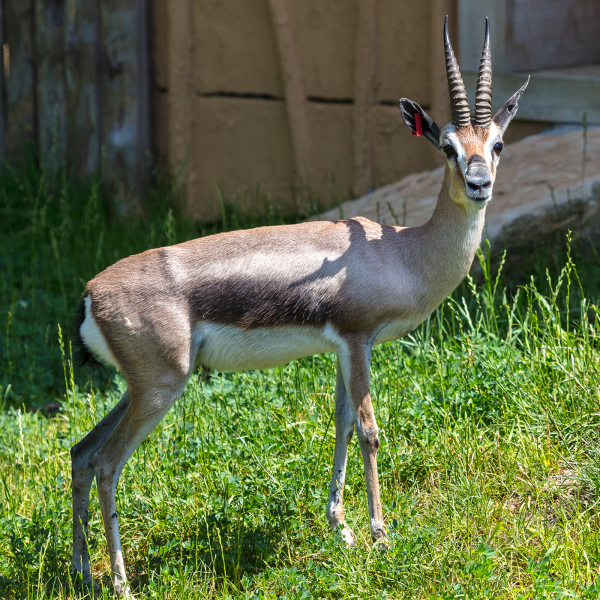 When they are excited or alarmed, they “pronk”, which is a combination of running, bouncing and jumping.

At one time, Speke's gazelles were widespread throughout Somalia and Ethiopia. Today, their range is limited to a narrow strip of grassland in northern Somalia that borders Ethiopia.

Speke’s gazelles are listed as “endangered” by the IUCN Red List. From 1980 to 2006, the gazelle population was cut by 50% due to scarcity of land for gazing. This species is also threatened by hunting, illegal trade and a lack of government protections. Several zoos are now engaging in breeding programs in human care to protect the Speke’s from complete extinction.