Snow leopards are medium-sized cats who adapted to living in cold, mountainous regions. They are covered in thick, smoky-gray fur with gray to black rosettes and spots that help them blend in with the rocky terrain. Their body is about four to five feet long, including a three-foot-long tail. This tail helps with balance and can be wrapped around the body while resting for warmth. Snow leopards have short forelimbs and long hind limbs that increase their agility and large paws with fur on the bottoms, which act as snowshoes. They have a well-developed chest and enlarged nasal cavities which help them breathe in the cold, thin air of their high-altitude habitat.

Snow leopards cannot roar, but they do make other vocalizations such as moans, yowls and “prustens” which are similar to grunts. A snow leopard is able to kill prey three times its weight. They will stalk their prey and spring from a distance of 20 to 50 feet for a kill. They eat very slowly and will stay with the kill to protect it from scavengers such as vultures or ravens. Therefore, they only need to hunt for food about twice a month.

Due to their excellent camouflage, elusive behavior and small numbers, snow leopards are difficult to study and are rarely seen in their native habitat.

Most of what we know about this species comes from research in zoos. We do know that snow leopards are crepuscular, which means they are active during dusk and dawn. However, they may become more active throughout the day in remote regions, or they may become nocturnal in areas where there is a large human population.

These solitary animals protect territories that overlap slightly, and individuals will only come together during the mating season. Despite their solitary nature, male and female pairs have shown high sociability and bonding in zoos.

Snow Leopard at the Akron Zoo 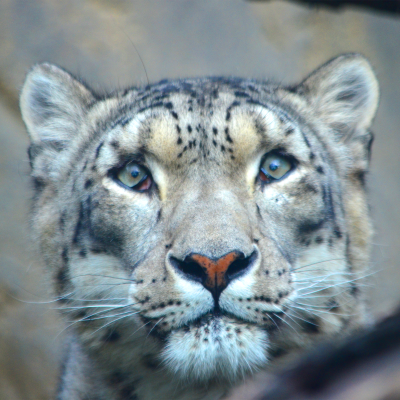 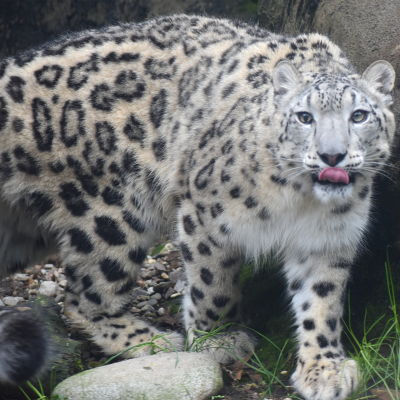 Our snow leopards can be found in the zoo’s Legends of the Wild area. 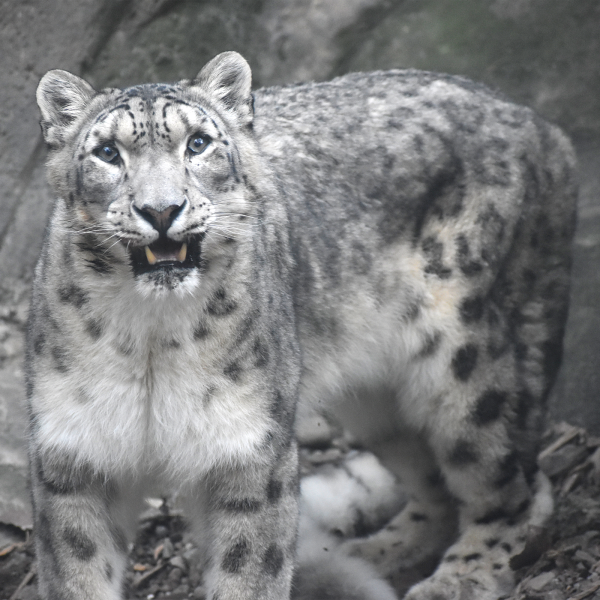 A snow leopard is able to kill prey three times its weight. They have loose belly skin which allows them to be kicked by prey with very little damage.

Snow leopards have a broad home range covering about 100 square miles due to the lack of prey. This environment is very harsh and spans steep, broken mountains where vegetation is sparse. Snow leopards show a strong preference for habitats with broken terrain, rocky outcrops and ravines as opposed to open smooth slopes or densely forested areas. They are found at elevations between 5,700 and 18,000 feet.

Snow leopards live in the mountains of Central Asia, specifically the Himalayas, Altai and Hindu Kush.

Blue sheep and wild goats are the most common prey of snow leopards. However, they will also hunt wild boar, tahr, gazelles, marmot, pika, hares, other small rodents and even game birds. During a prey shortage, snow leopards are likely to feed on livestock such as horses, sheep, goats and young yaks.

The snow leopard is listed as a “vulnerable” species by IUCN and is protected by the Convention on International Trade in Endangered Species of Wild Fauna and Flora (CITES Appendix I), which makes the trafficking of live cats, fur or body parts illegal. Threats to this species include poaching for use in traditional medicine, loss of prey, loss of habitat and human conflict. Unfortunately, the law enforcement of protected parks is severely lacking, and many native people are reluctant to participate in conservation efforts due to a lack of awareness.