Lemurs are thought to be the oldest living representative of the primate order. Though they have been here longer than monkeys or apes, they are still more primitive than other primates. Ring-tailed lemurs are medium-sized primates, weighing 6-8 lbs. and measuring 15-18 in. long, not including their tail. Their fur is gray or rosy brown on their backs with lighter gray or brown hind legs and white stomachs.

Ring-tailed lemurs are named for their distinctive tail, which has a black and white ringed pattern on the fur. These tails are often longer than their bodies, measuring up to 24 inches in length. Lemurs keep their tails raised high when traveling from place to place, which may help groups stay together and keep track of all their members.

Ring-tailed lemurs are social animals who live in groups of 5-25 members. These groups are matriarchal, meaning that the females are dominant. In general, females stay with the group that they were born into, while males tend to wander from group to group. A troop of ring-tailed lemurs needs 15-22 acres of dense forest and up to 57 acres of scrub habitat in order to find enough food.

Because these lemurs are territorial, there is little to no overlap in foraging areas. Ring-tailed lemurs will also sunbathe in groups. In the early morning, lemurs begin the day by sunning themselves. These lemurs sit with their front legs resting on their back legs while reclining slightly. This position exposes their bellies to the sun.

Groups of lemurs are diurnal, meaning they are active during the day, and often very vocal. Researchers have identified at least 15 different vocalizations, including purring and mewing, much like a house cat. Other calls include high-pitched yapping and barks, which are used as alarm calls when danger is near. Ring-tailed lemurs play an important role in keeping small animal populations in check, and they serve as a source of food for fossa.

Ring-Tailed Lemur at the Akron Zoo 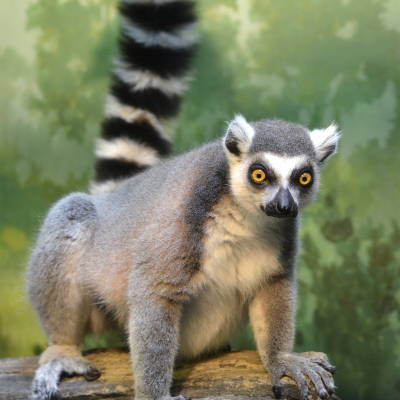 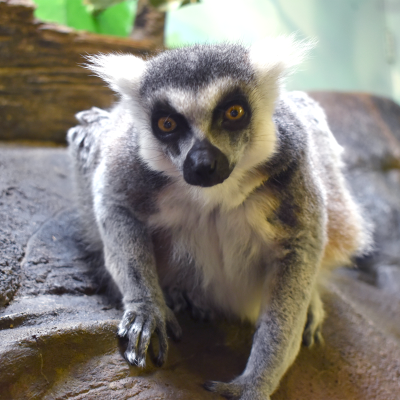 Ring-tailed lemurs can be found in the zoo’s Madagascar building, located in Legends of the Wild. They share their habitat with the zoo’s mongoose lemurs. 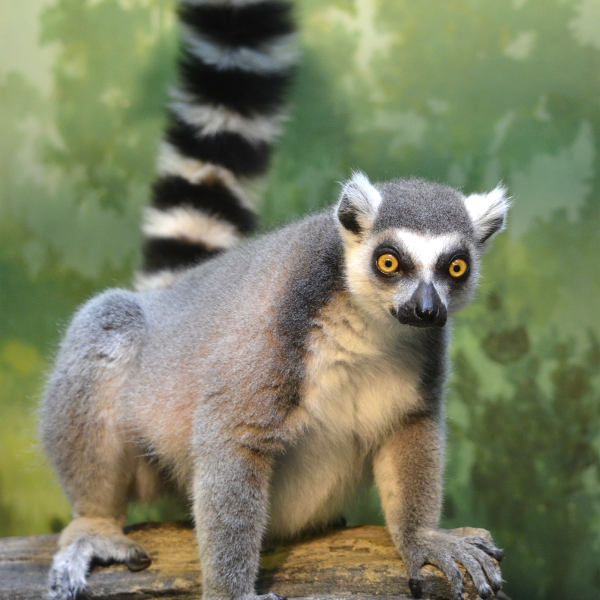 In Latin, “lemur” means “ghost or spirit.” Some cultures believed that lemurs were similar to spirits because of their loud vocalizations, wide eyes and nocturnal activity.

Ring-tails live in many types of forests, from deciduous forests to arid bush forests. However, they are unique since they spend more time looking for food on the ground than any other species of lemur.

Ring-tailed lemurs are found only on the island of Madagascar.

Considered opportunistic omnivores, ring-tailed lemurs will eat almost anything that is available. Most of their diet consists of fruits and leaves, but they will also eat flowers, herbs, tree bark, dirt and sap. They have even been observed eating spider webs, insects, small birds and lizards.

According to the IUCN’s Red List, the ring-tailed lemur is considered “endangered." This is due mainly to the rapid fragmentation and loss of habitats in Madagascar caused by fires, overgrazing by livestock and logging. Between 10,000 and 100,000 individuals are all that are estimated to remain in their native habitat today. These lemurs are also listed as “endangered” in CITES Appendix 1 and are part of a Species Survival Program (SSP) with the AZA.

The Akron Zoo supports the Madagascar Flora and Fauna group, an organization dedicated to supporting endangered species through research that informs conservation, conservation action, and education for both local people and conservation professionals.