Red wolves are considered the most endangered canine species in the world. On average these animals weigh about 50 pounds and stand 28 inches tall. Their fur color ranges from cinnamon red to gray or black. These wolves are smaller than gray wolves but larger than coyotes.

Males are usually about 10 percent larger than females. Packs consist of an alpha male, an alpha female and their offspring, with an average of roughly five to eight members in total. The alpha male and female form bonded pairs for life. There is a hierarchy of dominant and subordinate animals within the pack. A pack allows for protection and increased resources. Red wolves communicate with one another through body posture, vocalizations and scent markings. These nocturnal animals hunt at night and, though they will occasionally hunt as a pack to take down large prey, they tend to prefer hunting alone.

In the 1970s, only 14 red wolves were thought to still exist in their native habitat. At that time, all of those individuals were brought into human care, where they were placed in a zoo breeding program in an effort to save the species. Because of the conservation efforts of the U.S. Fish and Wildlife Service and many zoos, the population numbers have been able to increase in a protected area in North Carolina. Unfortunately, the population is once again on the decline, and as few as 20 wolves remain in their native habitat today.

Red Wolf at the Akron Zoo 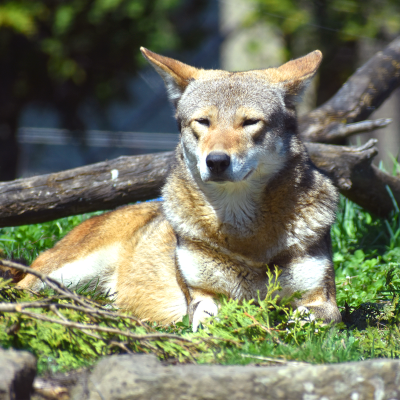 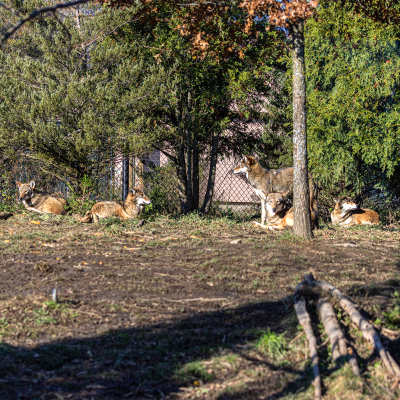 The red wolves can be found in the Mike & Mary Stark Grizzly Ridge area.

For the first time in the Akron Zoo’s history, we welcomed eight critically endangered red wolf pups on April 22, 2021. The pups were born to the zoo’s male red wolf, Waya, and former female, Juno. When they were just one week old, four of the pups were designated by the Red Wolf Recovery Plan, a program led by US Fish and Wildlife Services, to be cross-fostered in a den in their native habitat. This decision was made in order to support the critically endangered native population, which was estimated to have as few as 20 individuals remaining. The four largest pups, two males and two females, were transported to North Carolina on May 1, 2021, and USFWS officials successfully introduced the pups to the foster den that day. This was the first time since 2014 that red wolf pups had been reintroduced to their native habitat.

Fostering is a creative conservation strategy that takes wolf pups born in a managed care litter and places them within a native litter. A native wolf mother, who had recently given birth to pups of her own, successfully adopted the new additions as her own, and USFW continues to track the progress of this young family. The goal of fostering is to increase genetic diversity. With so few red wolves remaining in their native habitat, the introduction of the pups allowed for vital new genetics to be introduced to this critically endangered population.

Juno and Waya were paired based on a breeding recommendation from the Red Wolf Species Survival Plan (SSP). The SSP is a scientifically managed breeding program that works to ensure a healthy, genetically diverse population of red wolves in zoos. Since this historic birth, Juno and her daughter, Flora, were moved to a new zoo based on breeding recommendations from the Red Wolf SSP. Father, Waya, and sons, Manny, Poco and Hawk, remain on habitat daily. 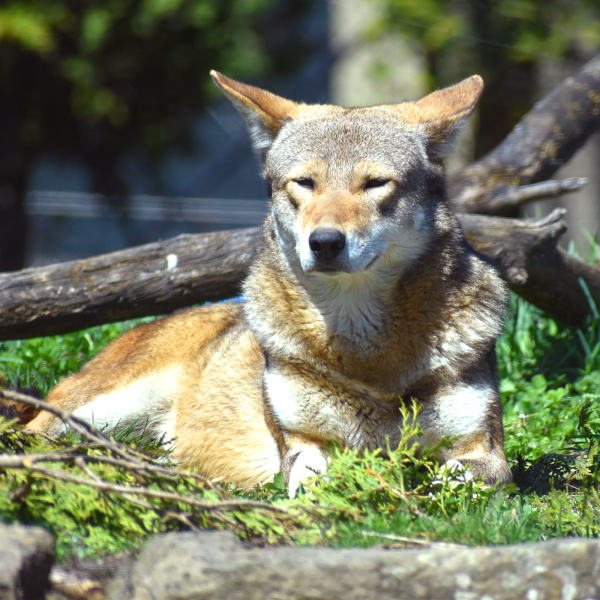 To enhance the genetic diversity of red wolves in the wild, the U.S. Fish and Wildlife Service Red Wolf Recovery Program places red wolf pups born at zoos and wildlife facilities with wild mothers and their pups. This practice is known as fostering and is a good way to reintroduce red wolves back into their native habitat.

Historically the red wolf could be found throughout the southeastern US. In the 1980s, the red wolf was officially extinct in the wild. Since then, the red wolf was reintroduced to its native habitat and today exists in a small area of eastern North Carolina.

Red wolves are carnivores and their diet consists mostly of small mammals such as rabbits and rodents. They will also eat insects, berries and occasionally deer.

Red wolves are listed as “critically endangered” as a result of intensive predator control programs and the alteration of their habitat. Their population was decimated by the 1960s due to intensive predator control programs and a loss of habitat. In 1973, red wolves were declared an endangered species, and in 1980 the US Fish and Wildlife Service gathered up 14 remaining red wolves to begin a breeding program in human care. The red wolf was reintroduced by the United States Fish and Wildlife Services in 1987 to eastern North Carolina. With the reintroduction of wolves and placing of selected zoo-born pups in litters, the red wolf population began to grow. However, so did human-animal conflict. Red wolves are often confused with coyotes and killed as nuisance animals. Additionally, the population is being threatened by hybrids between coyotes and red wolves. At this time the future of the red wolf remains uncertain.

The Akron Zoo also supports the Red Wolf Coalition, a conservation organization based in North Carolina that “advocates for the long-term survival of red wolf populations by teaching about the red wolf and by fostering public involvement in red wolf conservation.” The Red Wolf Coalition is a partner in the Red Wolf Recovery Plan, a program led by US Fish and Wildlife Services to reintroduce red wolves born in human care to their native habitat.