The red panda is a gentle creature that weighs about 8-14 pounds and is roughly three and a half feet long.

This species is covered with soft, dense fur that helps to keep them warm. The panda’s front legs are angled inward, causing them to waddle as they walk. They are built for climbing and spend most of their time in trees, which offer shelter, protection from predators, and a great place to sunbathe. In order to be better climbers, a red panda’s ankles can rotate backward, allowing them to climb down trees headfirst.

Female red pandas nest in tree hollows where they raise between one and three cubs. At birth, cubs are covered by thick, woolly gray fur. The cubs leave the care of their mother when they are fully grown at one year old. As a rule, red pandas tend to be quiet, although they sometimes communicate using squeals, twitters, hisses and grunts. When in distress, young cubs may also whistle to signal for help.
Red pandas are usually nocturnal or crepuscular and solitary, though they will sometimes travel in pairs or small family groups. Red pandas use scent markings to claim territory and will offer visual displays when provoked. If a red panda feels threatened, it may also climb a tree or strike at the predator with its semi-retractable claws.

An average of 90% of a red panda’s diet is made up of bamboo. Unfortunately, the red panda has a digestive system similar to that of a carnivore, so only about 25% of the already limited energy in bamboo can be extracted for use. In order to compensate, pandas spend roughly 13 hours eating each day. The red panda has an enlarged wrist bone, called a radial sesamoid, that forms an “extra thumb” which is used to grasp the bamboo for more efficient eating. The red pandas also have a low rate of basal metabolism to help preserve energy.

Red Panda at the Akron Zoo 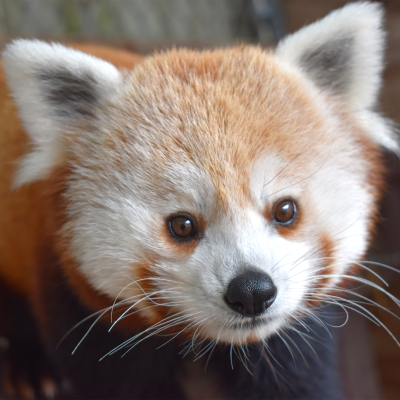 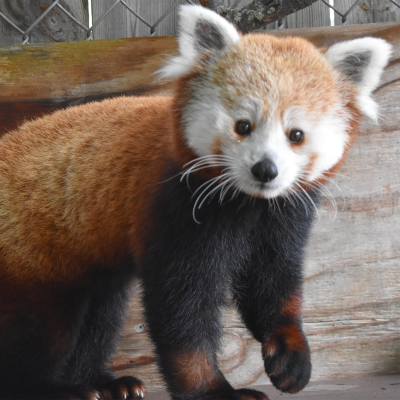 Lulu and Penny are sisters. 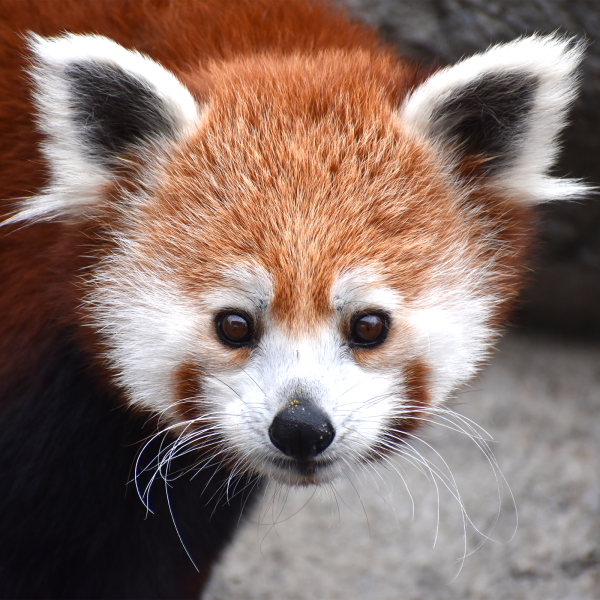 Red pandas inhabit high-altitude areas between 3,000 and 12,000 feet above sea level. They live in mountain forests and bamboo thickets, where they can tolerate colder temperatures than the giant panda.

These animals can be found throughout Southeast Asia, from the Himalayas to South China.

Red pandas are listed as “endangered” by the IUCN Red List. In less than two decades, red panda populations have decreased as much as 50% in their native habitat, and this decline is projected to continue. This rapid decline is due to habitat loss, logging, loss of food, human conflict and illegal hunting. The red panda is protected and listed in Appendix I of CITES. It is estimated that there are as few as 8,000 to 13,000 red pandas remaining in their native habitat.

The Akron Zoo supports the Red Panda Network, an organization that works with local people and communities to educate and build sustainable agricultural and grazing practices within a key rainforest corridor in Nepal. This area is home to about 25% of Nepal’s red pandas and is an area rich in biodiversity. Support for red pandas further protects all wildlife within the ecosystem.