The pygmy slow loris is a small primate, standing at just six to ten inches long and weighing around two pounds. The wooly coat of the loris is short and thick, and its color varies from light brownish to deep reddish-brown with a black midline down its neck and back. They have rounded heads and eyes, and their ears are small and nearly hidden by their thick fur. Lorises do not have tails, but they are well equipped for climbing trees thanks to their opposable thumbs.

Studies of lorises’ acoustic communication repertoire have recognized between six and eight different kinds of vocalizations. Additionally, all loris communicate through olfaction and use urine to mark their territories. They drag their lower ends and leave a trail of urine on the branch as they travel.

Slow lorises also perform a behavior known as “urine wash” where they rub their hands and feet in urine to spread their scent. Scientists speculate that urine washing may also be used to moisturize skin for better friction while climbing, improve temperature regulation or express nervousness or excitement.

Historically, lorises have been considered solitary, non-social primates since they are often found alone in their native habitat. However, in human care, many lorises have been observed grooming one another and appear to be ‘contact loving’ animals and they show very little aggression in family groups. In fact, most behavioral information available today is based on populations of lorises in human care. Field research of this species is rather difficult, partly due to the unstable political situations in their native countries and partly due to the nocturnal and secretive nature of the loris. 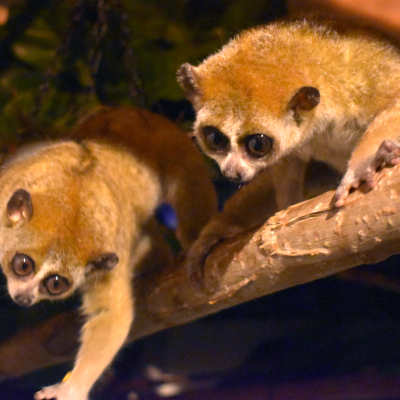 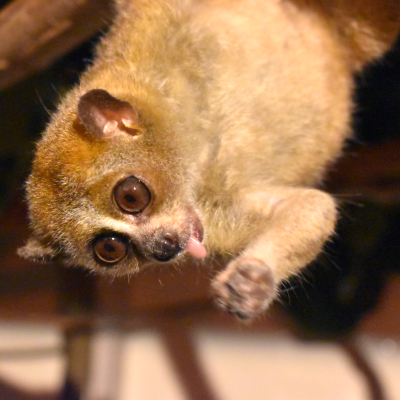 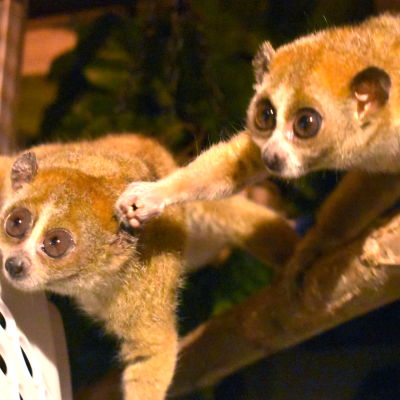 Our pygmy slow lorises can be found in the zoo’s nocturnal animals building, located in the heart of Legends of the Wild. Additionally, some of our slow lorises reside in our animal hospital.

Mai Ly lives in retirement in the zoo's animal hospital. 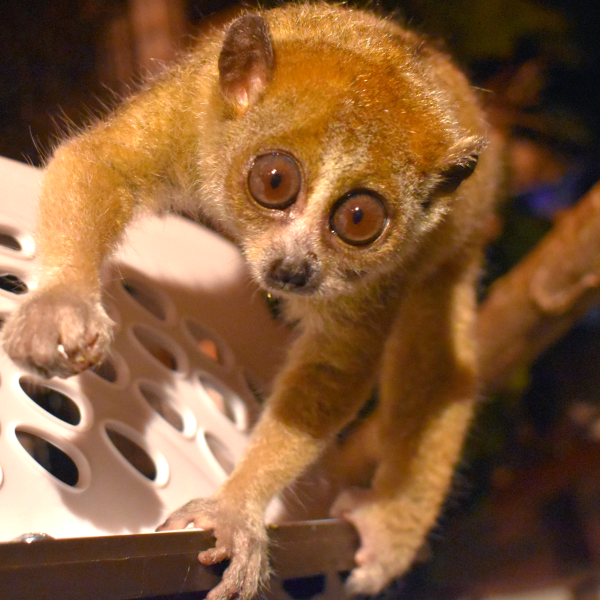 The muscles of the hands and feet allow for a strong grip. There are storage channels for blood in their hands and feet. This enables a clenched position to remain without tiring for long periods of time.

The pygmy slow loris is found in Vietnam, Laos, Thailand, China and parts of Cambodia.

In their native habitat, the slow loris spends most of their night foraging for invertebrates, seeds and fruit, though they will occasionally eat small mammals and birds as well. Lorises eat many “toxic” insects including ants and termites, as well as noxious bugs and butterflies that other animals will not eat, playing an important role in keeping the populations of these insects under control. This feeding habit could explain the loris’s low metabolic rate, which is less than half of the standard mammalian metabolic rate. The advantage of this “toxic” diet is an abundant and accessible food supply.

The pygmy slow loris is considered “vulnerable” by the IUCN. This species is heavily exploited for food, the pet trade, and use in traditional “medicine.” Additionally, 76% of their habitat has been lost to logging, military activities and hunting. A Species Survival Plan was established for the pygmy loris in 1994 in an effort to preserve the species.