Despite the name, naked mole-rats are more closely related to porcupines, chinchillas or guinea pigs than they are to moles or rats. These small animals are usually roughly three inches long and weigh between 1 and 1.5 ounces each.

Unlike many mammals, naked mole-rats live underground, so they don’t need a large amount of fur or hair to protect them from the sun. However, they still have large whiskers on their face to feel around in the dark and tiny hairs between their toes to act as a broom for cleaning and digging tunnels. Naked mole-rats dig tunnels and chambers using their large front teeth.

Each chamber has a different purpose, including rooms for nesting, storing food and going to the bathroom. Tunnel systems may be as large as six football fields. As naked mole-rats dig and maintain their burrows, they break up the soil allowing air and water to get in, keeping the soil healthy.

Naked mole-rats are eusocial, meaning that only 1 female (the queen) and 1-3 males reproduce. Colonies may have as many as 300 members, and queens must fight to earn and maintain a dominant position over the other females. In addition to the reproductive group, several naked mole-rats are designated as soldiers to protect the colony from threats and fend off predators with their sharp teeth. These soldiers are larger than most other members of the colony and can weigh up to 2 ounces. The queen, who is the largest member of the colony, can weigh as much as 2.5 ounces. The remaining members of the colony function as workers, digging tunnels, building chambers, scouting for food and babysitting the queen’s pups. Naked mole-rats are the only known mammal to practice this caste system.

Living in an oxygen-poor environment means naked mole-rats breathe a large amount of carbon dioxide, which can cause excessive amounts of acid to build up internally. This would be a huge problem for most animals, but naked mole-rats do not feel pain. Not only that, but they have also evolved the ability to lower their own heart rate, allowing them to survive several hours with low oxygen or even live for up to 18 minutes with zero oxygen with no adverse effects. Naked mole-rats also have a high resistance to tumors and cancer.

Naked Mole-Rat at the Akron Zoo 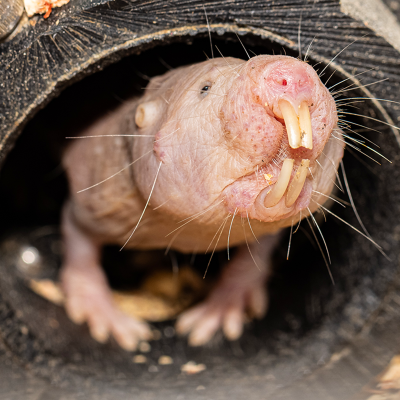 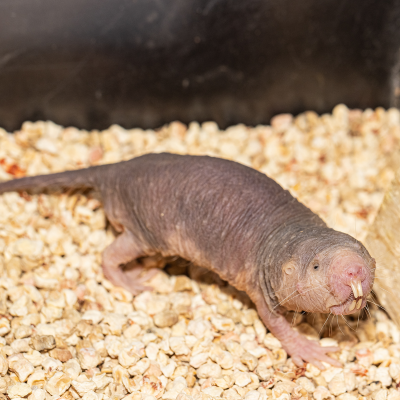 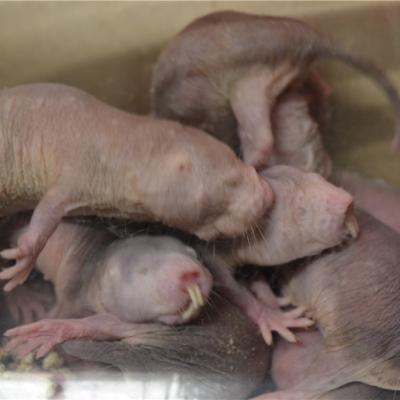 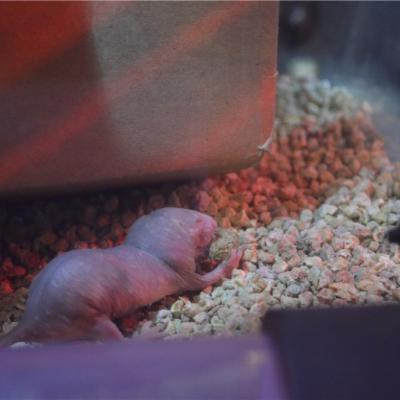 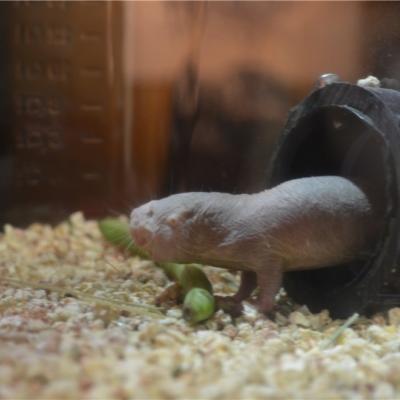 Our naked mole-rats can be found in Curious Creatures, located inside the Komodo Kingdom building. 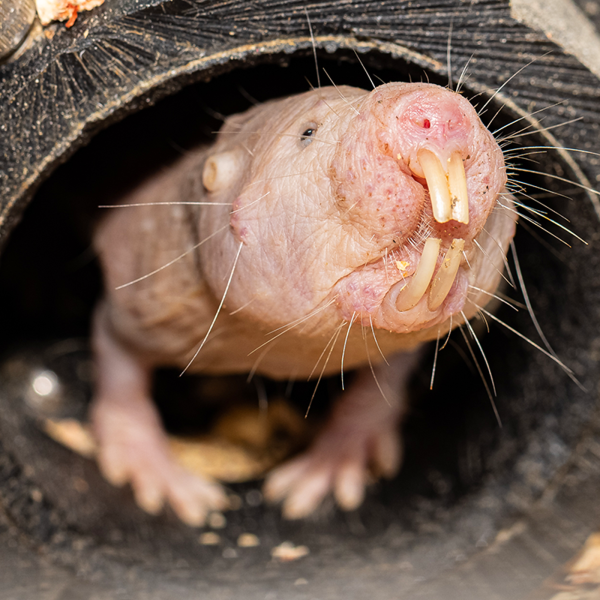 Because they live entirely underground in a consistently warm climate, naked mole-rats are the only ectothermic mammals on the planet, relying on their environment to regulate their body temperature. Because of this, they have a much slower metabolism than most other rodents, giving them the longest lifespan. In fact, naked mole-rats are capable of living over 30 years, as compared to a similarly sized rat that may live 1-2 years.

Naked mole-rats live in underground tunnels and burrow in semi-arid, grassy regions. They are found exclusively in arid conditions and can build burrows in a variety of soil types. Naked mole-rats dig tunnels and chamber systems around large plants with underground roots but will surface occasionally to search for seeds or plants.

Naked mole-rats are indigenous to Africa and are found in regions throughout Somalia, Ethiopia and Kenya.

Naked mole-rats are herbivores who eat the roots, tubers and bulbs of surrounding plants. However, roots and tubers are very hard to digest, so their intestines are full of microscopic organisms to help with digestion. To absorb more of the nutrients from their food, naked mole-rats will also eat their own poop.

Naked mole-rats are classified as “least concern” on the IUCN Red List, though climate change is expected to dramatically change African biodiversity in the future. Warming of the Earth’s air and ground temperatures is expected to cause droughts, making the soil too dry to support the naked mole-rats’ primary food source, tuberous plant roots, and negatively impacting the population.