Grizzlies are large brown bears with black noses and short round ears. The grizzlies have a hump on their back which is a mass of muscles that give the bear added strength for running and digging. Their powerful jaw and claws are good for defending themselves and marking their territory.

The name grizzly comes from their brown fur that has a white tip and gives them a “grizzled” look.

Female grizzly bears weigh upwards of 700 pounds. The males are heavier than the females and can weigh up to 900 pounds.

In late spring and early summer, grizzlies start looking for mates. A female will mate with many males throughout the breeding season. Once she is pregnant, the embryo will temporarily stop developing for several months. This allows the female to spend the summer storing up the fat needed so she can go into hibernation. The fat she stores up is needed so her cubs and she can survive the winter. When the female starts hibernation, the embryo restarts development — a phenomenon known as delayed implantation.

The female gives birth to her cubs in January or February. The female can have 1 to 4 cubs, usually 2. The mother will care for the cubs in the den until spring. Mothers are very protective of their cubs and will charge if they feel threatened. The mother will protect her cubs for 2 to 3 years then leave the cubs to defend themselves.

Grizzly bears reach sexual maturity around 5 years and mate once every 3 to 5 years.

Grizzly Bear at the Akron Zoo 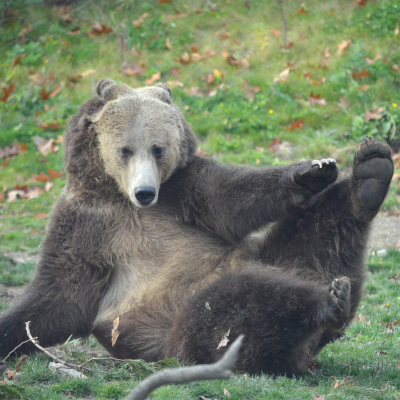 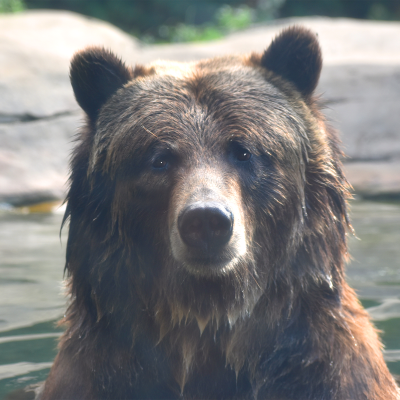 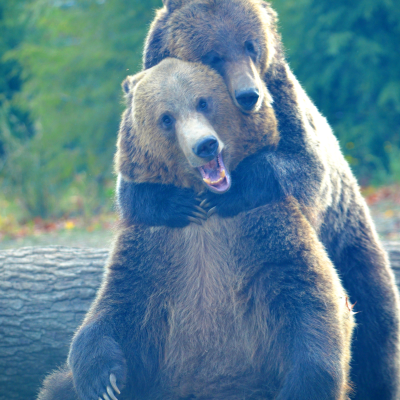 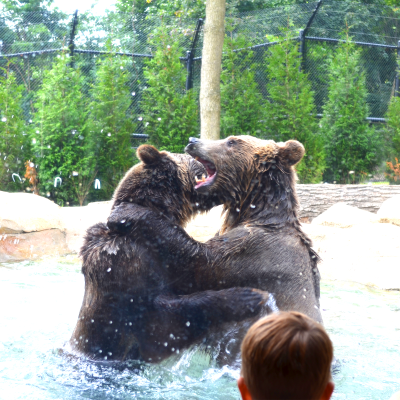 Jackson and Cheyenne were orphaned in their native habitat, specifically in Wyoming. Their mother was euthanized as a “nuisance bear.” U.S. Fish and Wildlife Services officials discovered Jackson and Cheyenne after their mom’s passing and the cubs were too young to survive on their own. The call was sent out to zoos and the brother and sister came to live at the Akron Zoo. 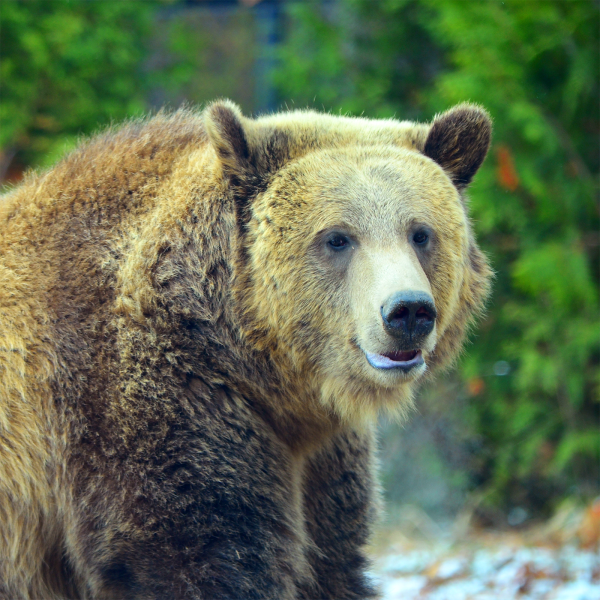 They can communicate through sound, movement and smell. Especially when the female is communicating with her young, they will grunt, moan and growl. Grizzlies will rub their body against trees and the ground to mark their territory and find a mate.

Grizzlies are found in woodlands, alpine meadows, forests, valleys, and near streams and rivers.

Grizzly bears once inhabited most of the Rocky Mountains and the Great Plains. Today their area has been reduced. Their largest population is found in Canada (250,000) and Alaska (3,170,000). They are also found in select areas of Wyoming, Idaho, Montana and Washington, such as Glacier National Park and Yellowstone National Park.

Grizzly bears are omnivores, meaning they eat both meat and veggies. About 75% of their diet comes from plants, fruit, grasses, mosses, nuts and roots. They also eat fish, rodents, elk, deer, insects and mountain sheep.

Grizzly bears are listed as “least concern” by the IUCN Red List. Their populations are currently stable.