Peacock mantis shrimp are one of the largest and most colorful species of mantis shrimp. Their size ranges from 1.2 to 7.1 inches and their narrow, hard-shelled bodies are covered in beautiful shades of orange, green, red and blue. These shrimps have mobile eyes that can move independently from one another, allowing them to better locate their prey. These complex eyes have at least 12 types of photoreceptors, which increases the speed at which they can identify colors and allows them to see in color vision, polarized light and even ultraviolet.

Peacock mantis shrimp are very aggressive hunters and are active during the day and at night. They have a specialized pair of front legs, or raptorial appendages, which are specifically adapted to punch prey.

Their strikes are powered by elastic forces, meaning that the farther back they pull their legs, the stronger the strike. Each strike generates two blows — one from the impact of the limb itself, and a second from the collapse of a cavitation bubble (or vacuum bubble) created by the speed of the blow.

Mantis shrimp are territorial and are typically solitary outside of mating. This species will communicate through vibrations, known as stomatopod rumbles, which are used for territorial and defensive purposes. Individuals will create vibrations while in their burrows, warning potential predators and other shrimp to keep their distance. If another mantis shrimp gets too close, it will use fluorescent colors to signal territory and threats.

They may also use their powerful smashers to strike each other's tail areas. For this reason, the tail is the most heavily armored part of the mantis shrimp’s body. 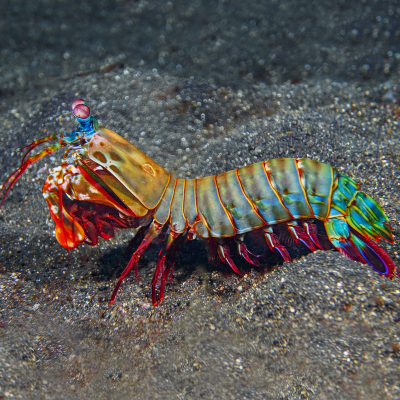 Our peacock mantis shrimp can be found in Curious Creatures, located inside the Komodo Kingdom building. 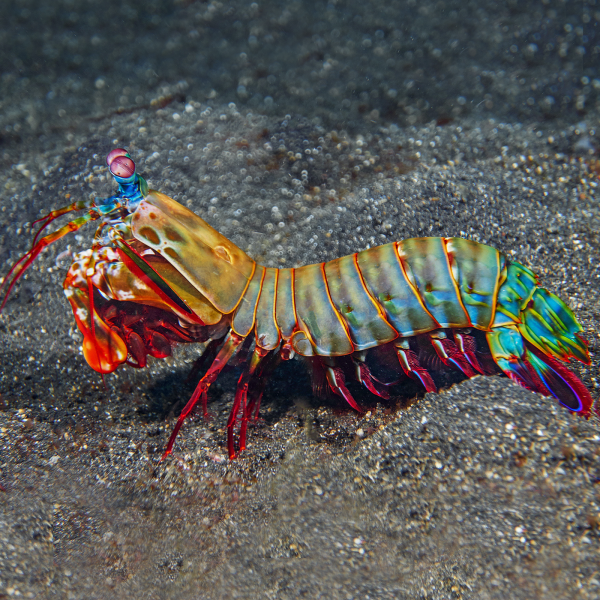 Peacock mantis shrimp can punch with a speed equal to a .22 caliber bullet! When kept in aquaria, these mantis shrimp have been known to crack the glass of their tanks.

Peacock mantis shrimp mostly live in shallow parts of the ocean, usually at depths of 30 to 100 feet. They prefer water temperatures of 72 to 82°F. They are commonly found in U-shaped burrows, often built near the bases of coral reefs on sandy and gravelly areas.

Peacock mantis shrimp are found in the Indo-Pacific Ocean, south of Japan, north of Australia, and between eastern Africa and Guam.

Mantis shrimp usually eat gastropods, crabs and mollusks. Thanks to their unique hunting abilities, the mantis shrimp is able to kill prey larger than its own body.

Peacock mantis shrimp have not been evaluated by the IUCN, but they are not considered endangered or threatened by any agency.