The Pacific sea nettle is one of more than 200 known species of jellies in the world today. Sea nettles have a distinctive golden-brown bell that is usually about ten to 12 in. in diameter.

These jellies swim constantly by pulsing water in and out of their bell, which is a necessity for oxygen exchange and feeding. At the edge of the bell, these jellies have light-sensing organs (ocellus) and gravity-sensing organs (statocysts) which they use to orient themselves within the water column.

Sea nettles capture prey using their thin, maroon tentacles, which may trail behind them 12-15 ft. These tentacles have millions of microscopic nematocysts, or stingers, which are used to stun their prey. Once the prey is captured, it is transferred to the long white oral arms, which move the prey up the arm, through and into one of the four stomach pouches where it is digested. 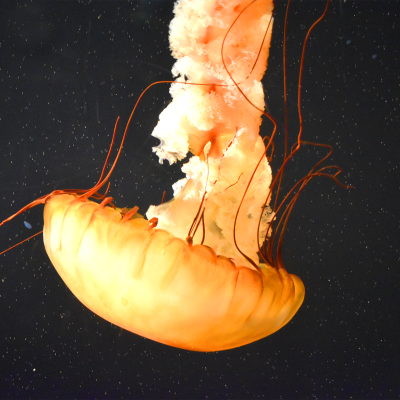 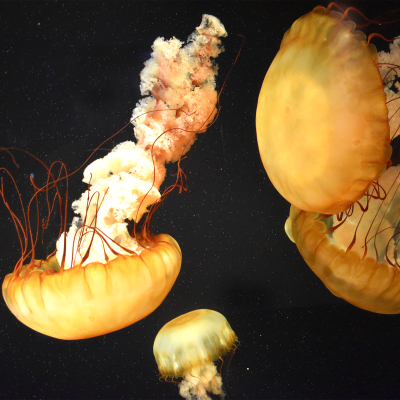 Pacific sea nettles can be found in Curious Creatures, located inside of the Komodo Kingdom building. 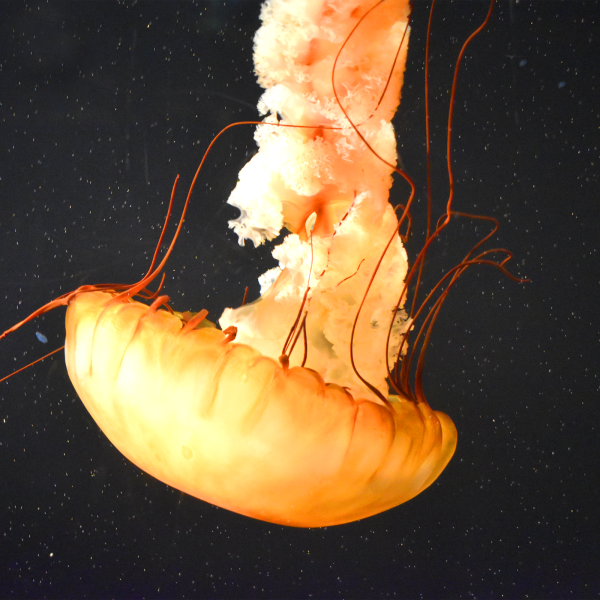 Jellies are some of the simplest animals on the planet – they have no brain, no heart and no central nervous system.

Pacific sea nettles live near the surface of the water column in shallow bays and harbors in the fall and winter. In spring and summer, they often swarm in deep ocean waters.

The Pacific sea nettle can be found in coastal waters of the Pacific Ocean, from Alaska and California to Japan.

They often eat small crustaceans, zooplankton, other jellies or fish eggs. Jellies at the zoo are given a diet of brine shrimp, colepods, zooplankton and frozen mysis and naupli.

This species is not listed by the IUCN. However, there is mounting evidence that human influences in coastal habitats may be creating conditions more favorable to jellies, leading to an increased frequency of blooms and reduced populations of larval fishes. Dense swarms of thousands may persist in an area for many months and can be quite a nuisance for fishing activities, scientific trawls and any kind of water intake. They may seem insignificant when washed up on a beach, but gelatinous animals are certainly worthy of our attention and study. The high abundance of sea nettles makes scientists believe they play a significant role in the planktonic food chain.