All ants are social insects living in organized colonies or female-dominated groups. The workers are the many sterile wingless female ants who are daughters of the queen. A leaf-cutter ant colony has a single queen that lays all the eggs and up to eight million workers.

Worker roles include caring for the brood, maintaining the nest, foraging for leaves, protecting the colony (soldiers), and feeding others.

Leaf-cutter ants inhabit the forest floor and construct an underground web of chambers where they “farm” and harvest their staple food: fungus. They create underground fungus “gardens” by clipping and gathering fresh vegetation and injecting the pieces with a fungal secretion that digests the often-poisonous plants into an edible and nutritious mushroom form. They build huge nests — up to 50 feet across and 16 feet deep.

Leaf-cutter ants and the fungus they cultivate evolved in close association and formed a symbiotic relationship whereby both species benefit (mutualism). The fungus is sheltered, fed, protected, and dispersed by the ants, and the ants are rewarded with bits of food.  Neither ant nor fungus can survive without the other.

Leaf-Cutter Ant at the Akron Zoo 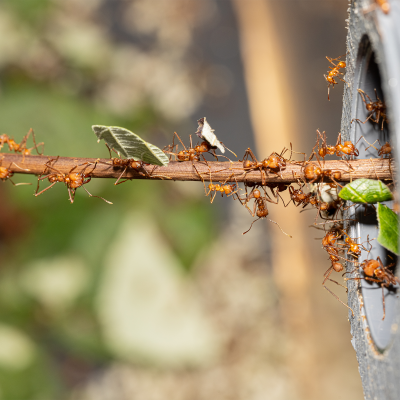 Leaf cutter ants can be found at the Akron Zoo in Curious Creatures.

A leaf-cutter ant can carry leaf fragments that are up to 20 times their own body weight while moving quickly over long distances. A proportionate task for an average adult human would be to carry 660 pounds while running a marathon at a 4-minute-per-mile pace!

They are found in rainforests, deciduous forests, open woodlands, and scrub forests.

Leaf cutter ants are found principally in Latin America and the Caribbean.

In their natural habitat, these ants consume more vegetation than any other animal group. Their own fungal secretion, which they inject into the leaves, can change poisonous plants into a nutritious meal.

Leaf cutter ants are considered common and not evaluated by IUCN Red List.