The giant Pacific octopus is the largest species of octopus, with some individuals reaching weights of 600 pounds and an arm span of 9.6 meters.

They are reddish in color but are capable of changing the color of their skin by contracting or expanding tiny pigment-containing granules within cells known as chromatophores, giving them the ability to blend into the environment.

The dorsal mantle of the octopus is sack-shaped and contains the hearts, brains, digestive organs, reproductive organs and two eyes. Their four pairs of arms extend from the base of the mantle.

Octopus are solitary and only leave their den to eat, mate or escape predation. Each pair of arms has up to 280 suckers that are specialized taste and touch receptors that help them detect prey. They are generalist foragers and leave a cache of discarded skeletons (middens) at the entrance to their den.

The octopus’s primary method of defense is camouflage. They can change their color in one-tenth of a second. However, when an octopus needs to escape, they can release a cloud of purple-black ink that acts as a screen, allowing them to use their propulsion to quickly swim away. Their ink is toxic to an octopus, so it isn’t used when they are cornered or as a direct defense. Instead, they will use their arms to attack an opponent, then release ink and swim away. 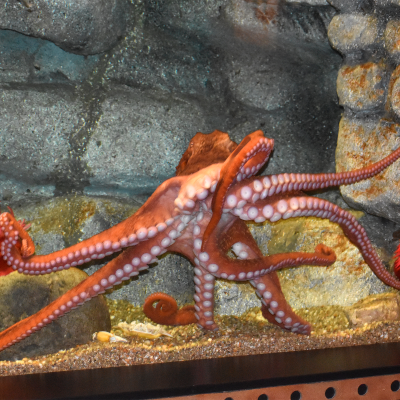 The giant Pacific octopus lives in Curious Creatures at the Akron Zoo. 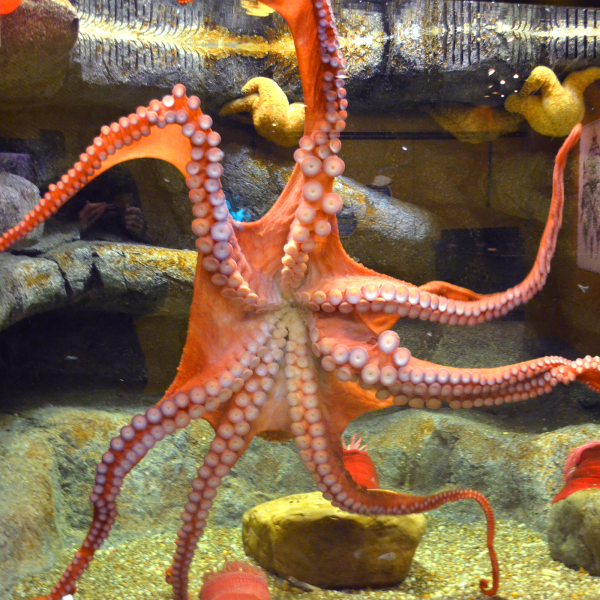 Giant Pacific octopus are incredibly intelligent animals, learning to open jars, solve puzzles, use tools and learn through observation. They navigate using landmarks thanks to their keen sense of sight and highly complex eyes that focus by moving the lens in and out.

The giant Pacific octopus is usually found in tidal pools and up to depths of 110 meters. However, they can live in much deeper waters. They prefer habitats with a soft substrate of mud, sand, or gravel, and large boulders and crevices for creating dens. They congregate in larger numbers near kelp fields.

They can be found in the coastal North Pacific, ranging from Baja California to the Aleutian Islands to Japan.

The giant Pacific octopus is listed as “least concern” by the IUCN Red List. Very little is known about the population of this elusive species.