The body of the electric eel is very long and round. They can grow to a size of about 44 lbs and 8 feet in length.

They are able to move around with ease through the water. They blend in well with their surroundings due to the dark brown, black and olive green coloring of the body. They have either yellow or orange that is on the belly. The eyes are small and do not have very good vision. They do have a great sense of smell they rely upon.

Electric eels have modified muscles or nerve cells called electrocytes that function as batteries and make electricity. The eels can release at least 600 volts (five times the amount in one electrical socket) using two different electrical organs, the “Main” and “Hunters” organs.

This burst stuns prey long enough for the eel to suction feed. They are not aggressive animals and will only use this tactic when necessary for defense or predation. They can also emit a low-level pulse of electricity (about the intensity of a battery) using an organ called the “Sachs” organ to find their prey in murky waters. This trait makes up for their lack of vision.

They are not technically eels — more closely related to carp and catfish. Unlike most fish, these eels live in low-oxygen environments and actually receive 80% of their oxygen intake from the air.

Electric Eel at the Akron Zoo 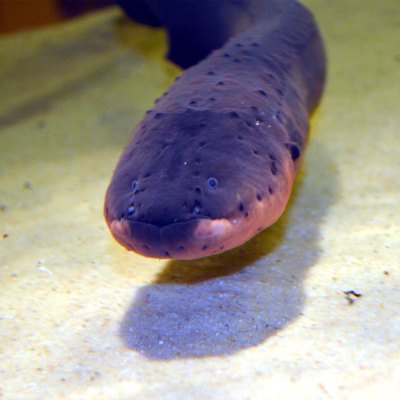 The electric eels can be found at the Akron Zoo in the Curious Creatures area. 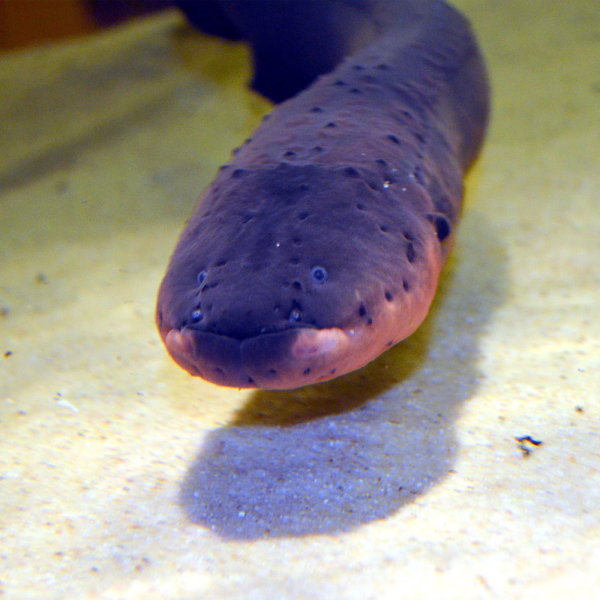 The electric eels’ head is charged positively while their tail is negative, therefore while scanning an electric current, they will do so from tail to head. This also means that the eel must be able to swim backward.

They live in the Amazon and Orinoco basins of South America.

Electric eels are classified as “least concern” by the IUCN Red List.