American lobsters are solitary nocturnal animals. They are also active at dusk and dawn. To avoid predators the lobsters hide in their burrows. They live in a social hierarchy that is identified by individual chemicals.

Food is digested through 3 stomachs, the first does the grinding, the second digests (the green part) and the third prepares the remains for elimination. They may eat their own shell once molted and will prey on other lobsters in captivity or in lobster traps.

The lobsters have 21 segments in 3 distinct body parts – 6 segments in the head, 8 in the thorax or chest and 7 in the abdomen or tail. Five pairs of legs comprise the thorax. Two claws are used for feeding. One claw is larger and is used for crushing prey, while the smaller claw is used for biting. The rear legs are used for walking. Their eyes are located on stalks found on the head segment. 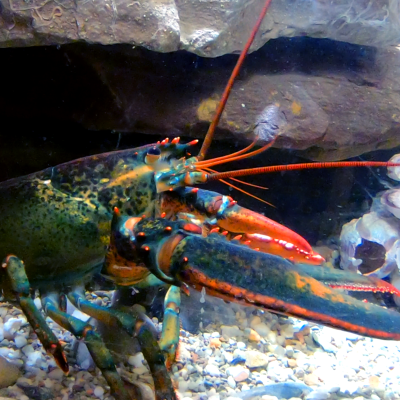 Akron Zoo staff were able to spring into action and Clawdia was brought to her new home the next day. 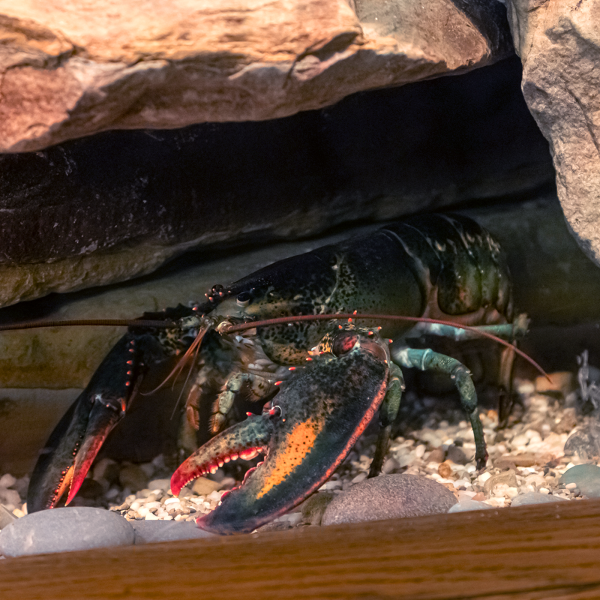 The blue coloration in lobsters is the result of a genetic anomaly. Blue lobsters are very rare, occurring 1 in every 2 million. The odds of catching a blue lobster are 1 in 200 million.

They live in deep and shallow water in rocky bottom areas so they may hide in burrows where they spend most of their day.

Lobsters live along the bottom of the Atlantic Ocean in both deep and shallow water along the New England Coast and extend as far north as Labrador.

Lobsters are scavengers of dead animals. Hunt at night for small crabs, other sea arachnids and small fish.

American lobsters are listed as “least concern” by the IUCN Red List.