Each year on August 14 we celebrate World Lizard Day! No one is quite sure how this unusual holiday got its start, but that doesn't make it any less fun to celebrate. Our world is home to thousands of unique species of lizards, from the large Komodo dragon, which can reach up to ten feet in length, to the tiny dwarf gecko, which is less than an inch long. Some species lay eggs while others give birth to live young, and some may have four legs while others have none, almost like a snake. Certain species can even regrow their tails after voluntarily breaking them off to escape a predator!

Though many of their physical characteristics may be wide-ranging, there are a few things that all lizards have in common. For one thing, they are all reptiles. Reptiles are air-breathing vertebrates who depend on their environment to regulate their body temperatures. Despite their dependance on warm weather, these animals can be found on every continent except for Antarctica. Reptiles living in areas with colder climates often experience a period of dormancy in the colder months, while their relatives living in warmer areas may be active year-round. Lizards are also all covered in scales or bony plates, and they regularly shed their skin as they grow. Ecologically, lizards are important as both predator and prey species, and are beneficial in helping to control agricultural pests such as rodents and insects. While a few species of lizards can be seen during a visit to Akron Zoo, several more lizards reside as education, or ambassador, animals at the zoo.

One unique lizard who lives here at the Akron Zoo is Louis, the prehensile-tailed skink. If you have not yet met Louis, it is because he is one of our animal ambassadors and does not have a public habitat. Instead, he lives in our education building, where he is able to participate in animal encounters and ZooMobile programs!

Louis was born at the St. Louis Zoo in 2004 and first arrived at the Akron Zoo in 2009. Since then, many staff have referred to Louis as a male, likely because of his name. However, it can often be challenging to determine whether a reptile is male or female because there are often no difference in visible characteristics between males and females. In early 2020, the Prehensile-Tailed Skink Species Survival Plan (SSP) requested that we give Louis a blood test to confirm his gender for potential breeding purposes, and we were finally able to confirm that he is, in fact, a boy! 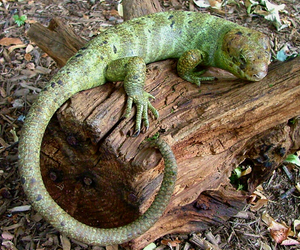 Louis's favorite food is red grapes, and he is known to have a very laid-back personality. Unless, of course, his keepers are trying to peel his shed skin from between his toes. Many keepers have compared the process to trimming the nails of a toddler - it is not his favorite activity. However, his caretakers do it with love and for the health of his toes during a shed. Most often, Louis can be found lounging on one of the branches in his bedroom, though sometimes he is more engaging and shows interest in what the keepers are doing. You can tell when he is curious about a new person or item because he will repeatedly flick out his tongue to smell his environment and learn ore about the new object.

Unfortunately, prehensile-tailed skinks are currently threatened by deforestation and the pet trade. Many accredited institutions participate in the Prehensile-tailed Skink SSP in order to help maintain a sustainable population of these amazing lizards in human care. You can help support Louis and other reptiles at the Akron Zoo by donating to our Animal Fund, or by visiting the park! A portion of the proceeds from every ticket purchase helps to support animal care, education and conservation at the zoo! 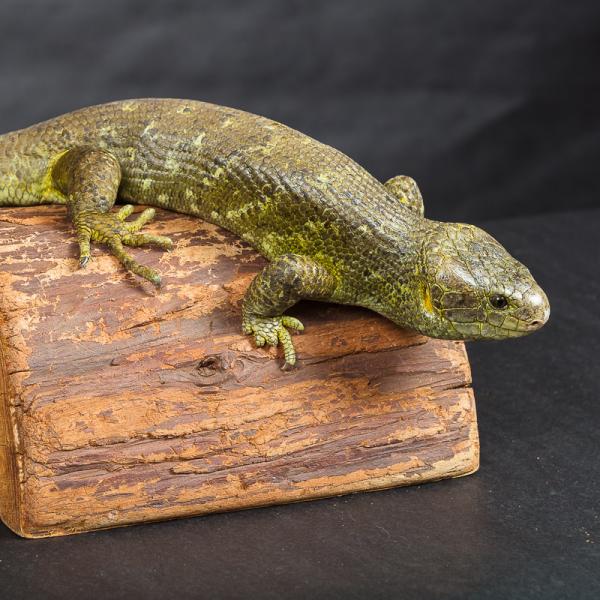