The Path to Making Zoo History

On April 22 we were blessed with eight gorgeous little puppies, born to first-time parents Waya and Juno. The pups are members of the most endangered canid species in the world, the red wolf. With their birth, your Akron Zoo was able to make a direct impact on the conservation of their native population; a once in a lifetime opportunity. Our road to pups has been an adventure to say the least, but it has culminated in the greatest joy of my career: watching the formation of our new red wolf family. 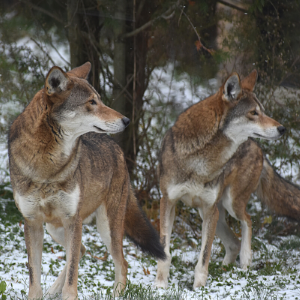 Your Akron Zoo participates in the Red Wolf Species Survival Plan (SSP), which helps maintain a healthy red wolf population in zoos. This program works in partnership with the Red Wolf Recovery Program, which helps manage all populations of red wolves, both in their native habitat and in human care. This species first arrived at the Akron Zoo in 2013 with the opening of Mike & Mary Stark Grizzly Ridge, and since then the zoo has been home to many individual wolves.

Our current male, Waya, first arrived in 2018, along with his brother, Mohe. Mohe and Waya were best buds, always playing together, sleeping together and generally attached at the hip. Unfortunately, after a few months, the two started showing aggressive behaviors, ultimately resulting in a fight between the brothers. It was my scariest day as a zookeeper. The two were given time apart to recover, but when we attempted to put them back together, neither would have it. We felt it would be better for both wolves that we find a new zoo home for Mohe. Mohe moved to the Point Defiance Zoo in Washington. As we worked with other zoos to bring Waya a new companion, we made sure he got extra enrichment and attention. 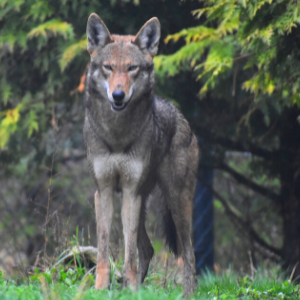 After much patience, Juno arrived from the Chehaw Zoo in March 2020. Being the principal red wolf keeper, I was able to make the trip to North Carolina to meet her former keepers and pick her up. As soon as we got back to Akron and let her into her new home, I was completely smitten. She was so small; small enough to be a coyote! The average red wolf weighs about 60-70 pounds, but Juno only averaged about 50 pounds – our little pixie wolf. Waya is a big boy, weighing in at almost 90 pounds, and since his last interaction with another wolf went poorly, we were all a bit nervous about their introductions. However, it was ‘love’ at first sight. Juno was drawn to Waya like a moth to a flame. There was endless sniffing, pawing and chasing, and I think it took Waya off guard to go from being alone to suddenly having someone so needy around him.

The pair quickly became inseparable, and we were able to get to know Juno as the lovable nutcase that she is. They have been the quirkiest pair – Waya always trotting around with his goofy dog ‘grin’ and tongue hanging out the side of his mouth, and Juno bounding around, having an absurd habit of ripping sticks off trees for no apparent reason. We were hopeful that someday, given time, the two may even take their relationship to the next level! 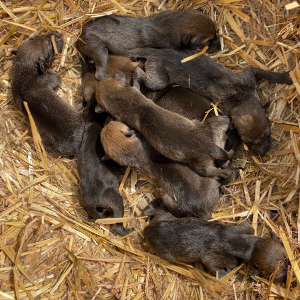 As a species, red wolves have a very short window for breeding - often only a matter of days. We did our best to monitor the new pair, but we did not have high hopes for pups during their first breeding season, as neither wolf had ever bred before. However, a few weeks later, I swore that Juno’s belly looked a smidge bigger. No one else had spent nearly as much just STARING at her, so I got a lot of “you’re crazy” reactions. As she started to get bigger, we had to really start asking, “Is she getting fat or is she actually pregnant?” We began preparing for potential babies – setting up den spots throughout the habitat, off-habitat yard and even in their building. After a few more weeks, Juno started to pull out the fur on her belly, which was now about the size of a pygmy goat. Pups were on the way!

Finally, on the afternoon of April 22, she disappeared into a den box and by the next morning we had eight perfect little puppies. EIGHT! That is a huge litter, even more daunting for a first-time momma with a small frame. Was Juno going to be able to take care of that many babies? The first 72 hours are critical, but Juno took great care of her little ones, who all got a perfect bill of health after their first vet exam. They had full little bellies every day that we checked on them. However, there were still questions: Will Juno be overwhelmed as they get bigger? What are we going to do with 10 adult wolves when they grow up? Do we have enough space? 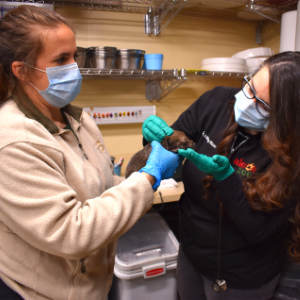 Then we were approached with the opportunity of a lifetime - we were asked to foster four of Juno’s pups to a mom in her native habitat! As a keeper for such a critically endangered species, you always know there is the possibility that the animal may be released into their native habitat, but you rarely actually see it happen. There are only a handful of species with reintroduction programs, and the Red Wolf Recovery Program had not fostered pups to their native habitat since 2014. Yet, here it was, the relaunch of an amazing program; the opportunity for us to make Akron Zoo history. This is the reason we join this field!

To reintroduce these pups, the Akron Zoo had help from some of the most amazing people in wolf conservation. Every step of the way they gave us advice on how to set these pups up for success. At only one week old, we pulled our four biggest pups and began the trip to North Carolina. Within six hours, they were placed in their new den and, a few days later, we got word that their new mom had accepted the pups and was caring for them.

Back in Akron, we waited with bated breath to see how Juno would respond to the change to her den. Would she continue to take care of them? Would she move them to a different place? The experts in wolf breeding assured us that with pups this young, wolf moms only really notice whether pups are latching on to eat, not how many pups are latching on. Sure enough, Juno went right back to being an attentive, ever-capable mom. 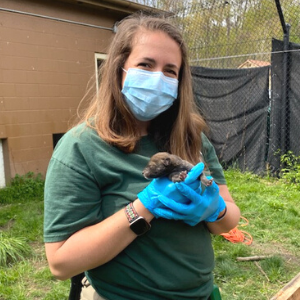 It has been the greatest joy of my career, maybe even my life, to watch Juno and Waya become such amazing parents. Juno has made the most perfect puppies and Waya has been standing guard every step of the way, always laying on or around the den box, constantly checking on both mom and babies. Since the day Juno arrived in Akron, she was always Waya’s shadow and now he is always hers. I am utterly overwhelmed by how proud I am of them.

In the past week, the puppies have started to wander outside of their den and Waya has been in absolute daddy bliss. He sniffs every single one, then flops on the ground and lets them climb all over him. “Heartwarming” does not even begin describing his journey. I am so excited for the pups to venture out to the habitat, not only so that people can see them, but for people to see the incredible bond between mom, dad, and babies. We are all over the moon, and I am so happy to share this experience with the world! 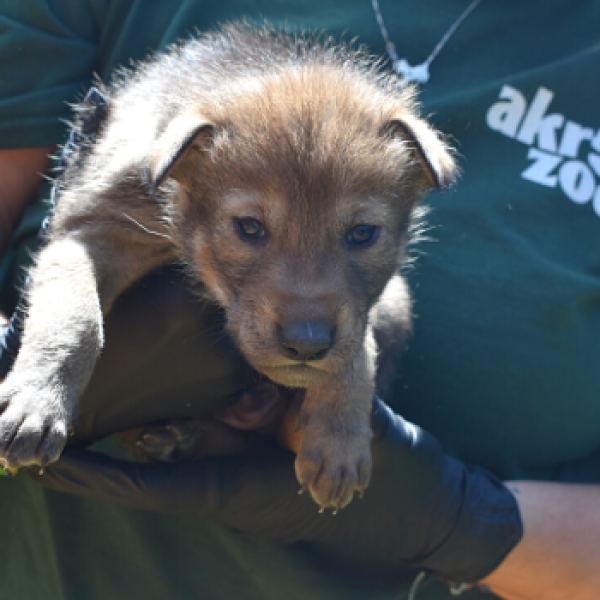