Komodo Dragon: King of the Reptiles

Celebrate Reptile Awareness Day by learning about these endangered lizards

I can't think of a better way to celebrate Reptile Awareness Day than learning about the king of the reptiles: the Komodo dragon! Of the more than 3,000 species of lizard alive today, Komodo dragons are by far the largest and heaviest. Adults can reach up to 10 feet in length and weigh as much as 300 pounds!

Despite being named after the Indonesian island of Komodo, the Komodo dragon actually originated in Australia. According to fossil records, the Komodo dragon made its way from Australia to the Indonesian islands 900,000 years ago, where they can still be found today. It is estimated that these animals disappeared from Australia around 50,000 years ago when humans first arrived on the continent. Western scientists were not aware of the existence of these giant reptiles until 1912. Up until then, Komodo Island natives called these animals "ora," which means "land crocodile." It wasn’t until the early 1900s when westerners began hearing rumors of giant, dragon-like lizards on the Lesser Sunda Islands that the species earned its common name, the Komodo "dragon!"

Your Akron Zoo is home to two Komodo dragons, Padar and Draco. Draco, our female, was born in October of 2010 and came to the Akron Zoo in 2012 from the Denver Zoo. She can be identified by the white spots on her shoulders. Padar, our male, was born on August 6, 2011. He came to the Akron Zoo from the Chattanooga Zoo in 2016. Unlike most male Komodo dragons, who tend to be larger than their female counterparts, Padar was significantly smaller than Draco when he arrived in Akron. However, thanks to the attentive care of his keepers, today the two are nearly the same size! Despite having two dragons at the Akron Zoo, guests will never see both of these animals on habitat at the same time since Komodo dragons are solitary animals.

Because these reptiles are so large, they have a big appetite to match. Komodo dragons can eat as much as 80% of their body weight in a single sitting, and they aren't picky about their prey. In their native habitat, a Komodo’s diet may consist of wild horses, deer, buffalo, small mammals, birds, snakes, eggs, fish, crabs and even smaller Komodo dragons. They need this energy to power their muscular bodies, which allow them to run roughly as fast as the average human – about 11 miles per hour. After eating, Komodo dragons will often lounge in the sun to help their digestion.

Perhaps one of the most well-known Komodo dragons was Naga, a male given to President George H.W. Bush by Indonesia’s government in 1990. Though the thought of seeing a 9-foot-long lizard in the oval office is certainly entertaining, it was recognized that these animals have no place as pets, and Naga was donated to the Cincinnati Zoo where he could be better cared for. Naga thrived at the zoo, having 32 offspring before passing away in 2007 at the ripe old age of 24.

Sadly, many threats face Komodo dragons today, including legal and illegal hunting, habitat loss, poaching of prey species and climate change. In 2019, this species was listed as endangered by the IUCN Red List, with as few as 1,380 individuals remaining in their native habitat. Many can be found in the Komodo National Park, established in 1980, which has strict anti-poaching laws and offers a safe haven for this species. These dragons promote tourism and provide economic incentives for local people to support the Komodo dragon’s protection. In addition to this park, zoos and other conservation groups around the world are working to protect these species through research and education. 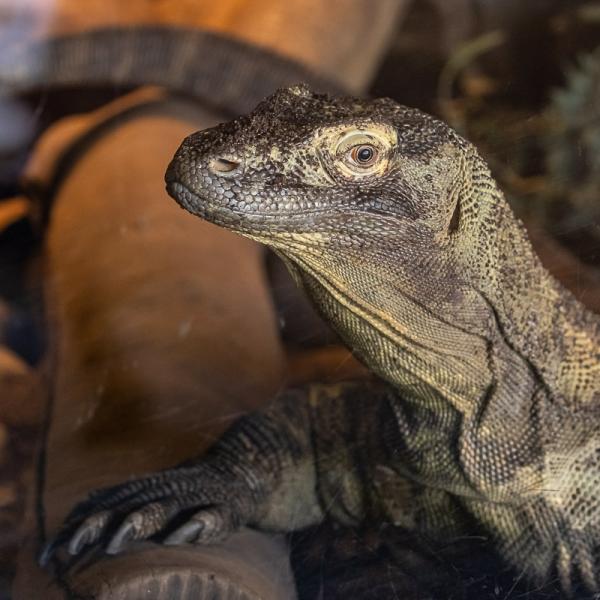