White storks are large wading birds that stand at about 3.5 feet tall and have a wingspan of roughly 5 feet. These birds are covered in white feathers and have black primary feathers at the tips of their wings. They have long slender legs and long sharp, thin bills that are bright orange in color. Males tend to be larger than females on average, but other than that, males and females look the same. Storks are active during the day and, when not protecting a chick, they are typically not territorial. White storks are opportunistic omnivores who will swallow a prey item whole if it is small enough. Otherwise, they will kill their prey and tear it into pieces small enough to swallow. White storks play a large role in keeping the populations of many small freshwater animals from getting too large. Their young also provide food for hawks and eagles.

Storks are known to be long-lived birds. The oldest native bird on record lived to be 25 years old, while individuals in human care have been known to live up to 48 years. Storks are also known for their elaborate mating dances. White storks have their own unique “dance” in which the male will start off by crouching over the prospective nest that he has built, then shaking his head back and forth. Next, both the male and female will extend their heads, flap their wings and clack their bills to create a clattering sound. This “dance” is done every year, even with previously established mating pairs, and is thought to cement a bond. These storks are socially monogamous, meaning that the same pair will raise offspring together.

White storks tend to live in loosely formed groups with one another. During the breeding season, non-breeding individuals will form groups of up to 40 or 50, and during migration, storks can form groups of hundreds or even thousands. The sheer numbers of these groups and their carnivorous habits make it essential for these flocks to fly to foraging areas and take advantage of soaring and gliding whenever possible. Storks can sometimes be seen riding thermals and taking advantage of patterns of rising air along migration routes.

White Stork at the Akron Zoo 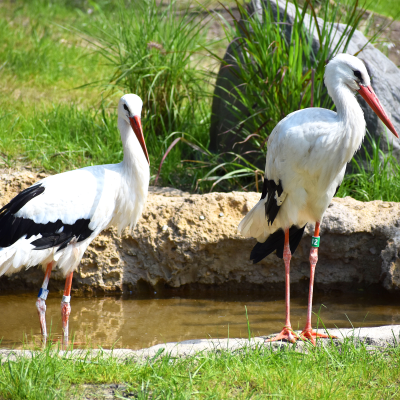 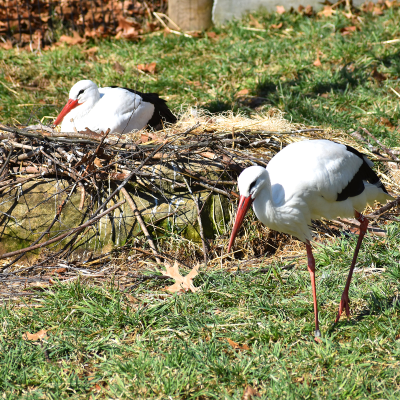 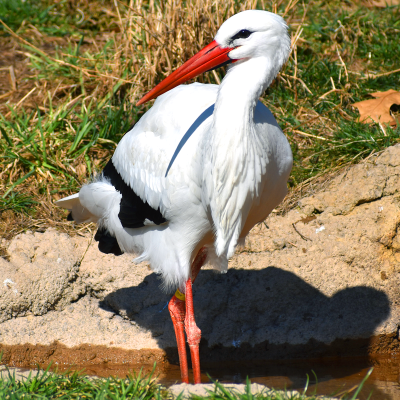 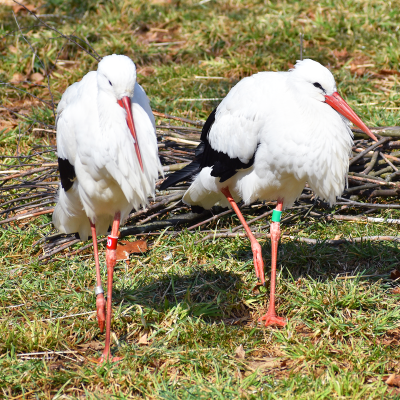 The white storks can be found in the Landon & Cynthia Knight Pride of Africa area. They share their habitat with Speke’s gazelles and guineafowl. 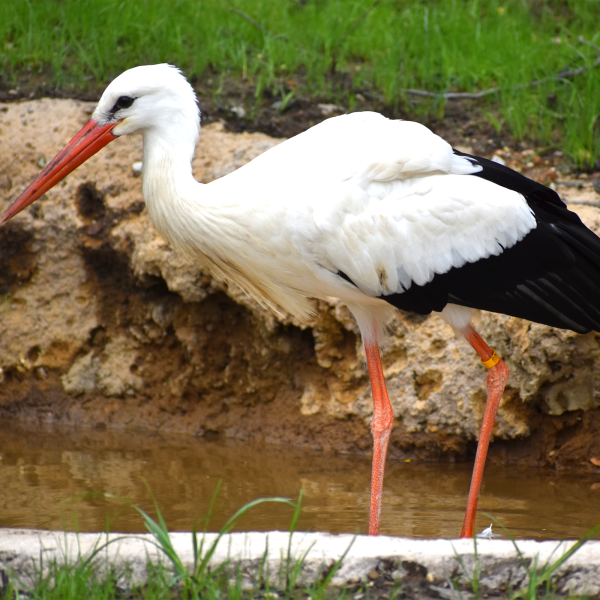 White storks form large flocks during migration, sometimes numbering in the thousands of individual birds. When joined by white pelicans and migrating raptors, these migration groups have been known to stretch up to 125 miles.

White storks prefer a habitat with low or shallow standing water, such as ponds or permanent pools, surrounded by tall trees to nest. They will hunt for food in wetlands, meadows and farmlands, though they tend to avoid areas with extremely tall grass or shrubs. They have also acclimated to living in close proximity to humans by utilizing rooftops and chimneys for nesting instead of tree branches.

The white stork can be found throughout much of Europe, the Middle East and western and central Asia. Populations have also been spotted in Africa, the Netherlands, Turkey and Northern Greece.

White storks are classified as “least concern” by the IUCN Red List. However, there has been a steep decline in the number of European white storks in the last 50 years, most evident in Western Europe. Pesticides, a decline in wetlands, pollution, parasites, disease and hunting are all responsible for threatening stork populations. Recently, land use policies in eastern Europe have helped to support the species in its native habitat.