Temminck's tragopan is one of five species of tragopan pheasants and is often regarded as the most beautiful pheasant species. Males are brightly colored, sporting orange feathers with white spotting and a blue face surrounded by black. Like all tragopans, males have an amazing display ability to attract the attention of females. These males are able to inflate a wattle “bib” from their throats. This "bib," also called a lappet, is particularly vivid with red and blue markings. Female tragopans are far less showy, with dull grey and brown plumage covered in white spots. These birds are medium-sized, round pheasants with a wingspan of roughly 30 inches.

Temmick’s Tragopan at the Akron Zoo 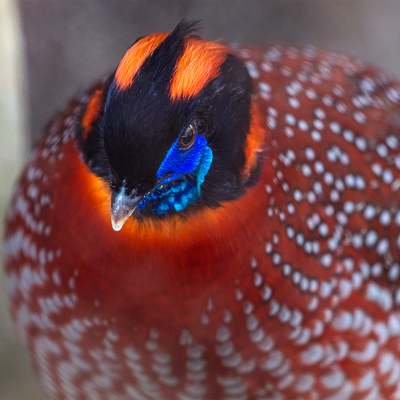 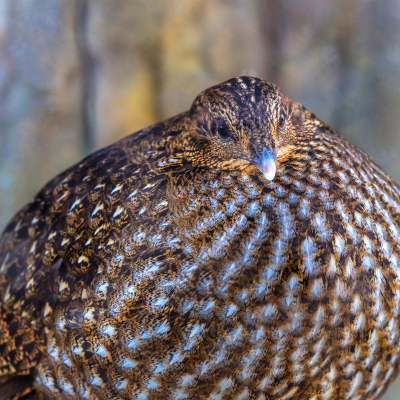 The Temminck’s tragopan can be found seasonally in Legends of the Wild. Tragopans occupy the habitat during the winter, then trade places with the Hyacinth macaws, who live in the habitat for the duration of the summer.

Temminck’s tragopan are notoriously shy birds and, unlike most pheasants, they prefer to nest in trees.

Temminck’s tragopans are found in damp evergreen forests that contain densely growing rhododendron and bamboo. These birds may travel up and down the slopes of the Himalayan mountains, based on seasonal temperature changes.

In their native habitat, Temminck’s tragopans will usually eat a diet of berries, grass and other plants.

This species of tragopan is currently listed as a species of “least concern” by the IUCN Red List. However, habitat loss, hunting and some popularity in the pet trade can all impact future classification.