The adult Humboldt penguin is about 26 inches tall and weighs about nine pounds, which is roughly mid-sized of all penguin species.

The male and the female penguin cannot be distinguished from one another without the aid of distinct behavioral cues (blood samples can also be used for distinction).

The penguin is well adapted to life at sea, but it still has “true” bird feathers. These include a dense covering of three layers of short feathers, wings that have been reduced to strong, narrow, stiff flippers and stout tail feathers that are used as a prop when the penguin stands.

Webbed feet are also located far back on the body and are used as rudders when the penguin swims.

The penguin has a supraorbital gland that enables it to drink salt water in addition to fresh water. The gland withdraws excess salt from the penguin’s blood and excretes it in a very concentrated solution that dribbles down the penguin’s bill. Penguins live in fresh water in most zoos, so this gland is dormant.

Humboldt penguins are very social animals; they live in large colonies where communication is important. The colonies are very important because they serve as a form of defense.

Humboldt Penguin at the Akron Zoo 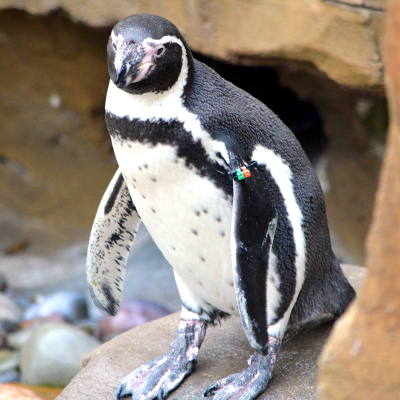 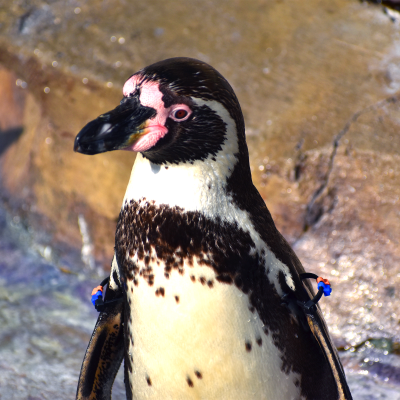 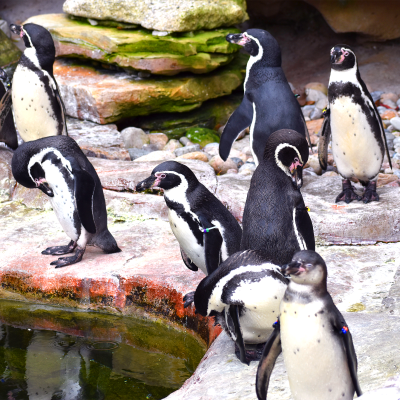 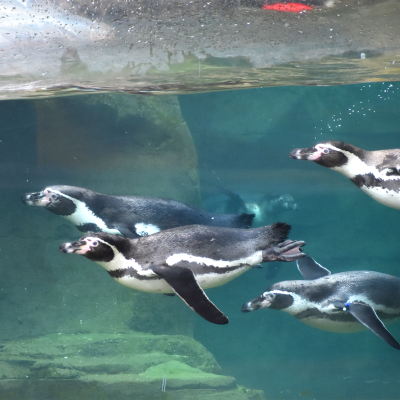 The Akron Zoo’s penguin habitat, Penguin Point, is the first habitat guests visit when they enter the zoo. Each penguin wears an ID band — the males are black and the females are clear with a unique color combination.

The Humboldt penguin lives on rocky mainland shores. It can most often be found near cliffs or on various coastal islands.

Humboldt penguins are found along the coast of Peru and Chile in the Humboldt Current.

Humboldt penguins are listed as “vulnerable” by IUCN Red List. Populations are decreasing due to prey loss and guano harvesting to be used in fertilizer and hunting.

The Akron Zoo supports the Center for Conservation Punta San Juan which focuses on population and health monitoring of penguins and seals as well as promoting sustainable guano harvesting.