Guineafowl are large round birds with small heads. They are monochromatic and monomorphic, meaning that both males and females look and act the same. Crested guineafowl have dark grey to black plumage with whitish spots. They are known for their crest of black feathers on their heads. The rest of their heads and necks are bare, with red skin around their eyes and blue necks.

Guineafowl typically live in flocks with several other birds, up to about 20. They are known to make a large harsh call when disturbed. Males make “kek-kek-kek” or “chi-chi-chi” calls, and females make "buck-wheat buck-wheat" cries.

Because of their noisy nature, people will use them as “guard” birds for flocks of chicken and other barnyard fowl to protect them from hawks, owls, raccoons or other predators. The guineafowl are also known to defend themselves by pecking, scratching and flapping their wings at predators.

Crested Guineafowl at the Akron Zoo 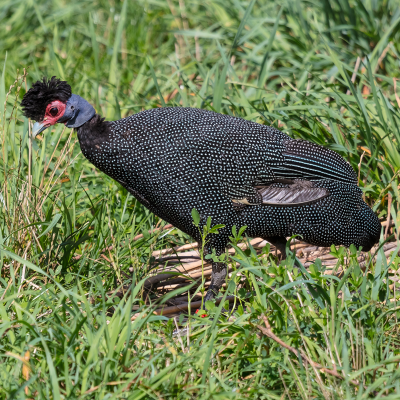 The crested guineafowl reside in the multi-species habitat in Landon & Cynthia Knight Pride of Africa. They live among the Speke’s gazelle and white storks. 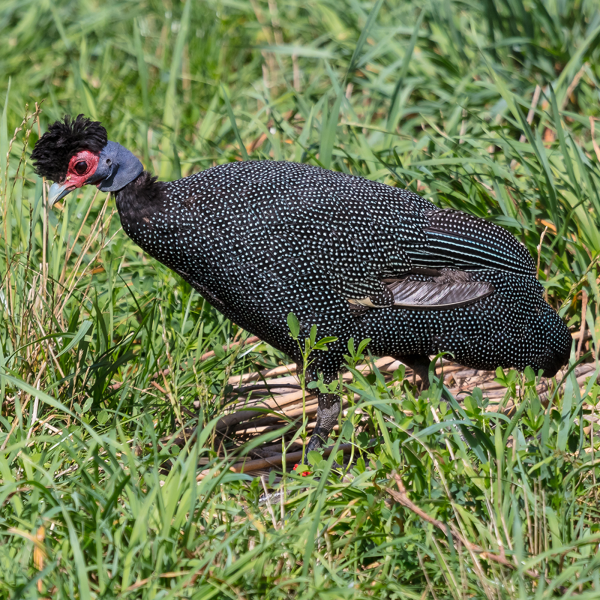 Guineafowl spend most of the day on the ground scratching for food with their strong claws and roost in trees at night. As many as 2000 of them can be seen roosting in one large tree. When foraging, they can cover the equivalent of 10 K (6 miles) each day.

Native guineafowl are found throughout sub-Saharan Africa in a variety of habitats. Additionally, they have been domesticated and are farmed in Africa and throughout the world.

The crested guineafowl population is stable, therefore the species is listed as “least concern” by the IUCN Red List.