Like other frog species, poison dart frogs begin as tadpoles. As they become adults, frogs grow limbs, loose their tails, develop lungs and onto land.

Adults are usually black with green or light blue spots or bands, though some species may be a wide variety of colors including metallic green, brown or yellow. These bright colors are believed to warn predators with color vision that they are poisonous.

Poison glands are located throughout the surface of their body and contain a toxin that affects the nervous system and muscles, causing paralysis and eventually respiratory failure. This poison is potent enough to immobilize animals as large as a monkey. This toxicity likely comes from the frog’s native diet, since frogs in human care are generally not toxic. These frogs only have one natural predator that has developed an immunity to their toxin: the fire-bellied snake.

Poison dart frogs are rarely still during the day. They are constantly searching for food and taking care of the young with distinctive hopping motions. These frogs are often solitary and territorial. Disputes over territory can lead to aggressive behavior including belly-to-belly grasps and a sporadic buzzing call. Males will use vocalizations to attract females for mating and to advertise territories. 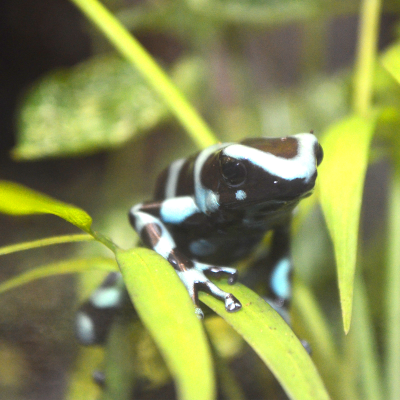 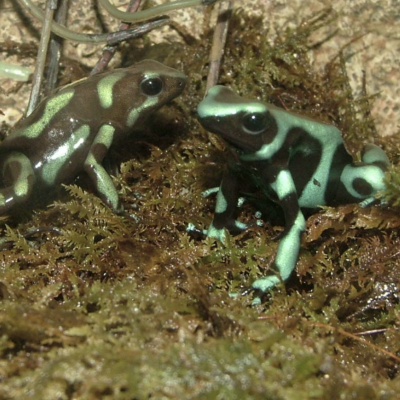 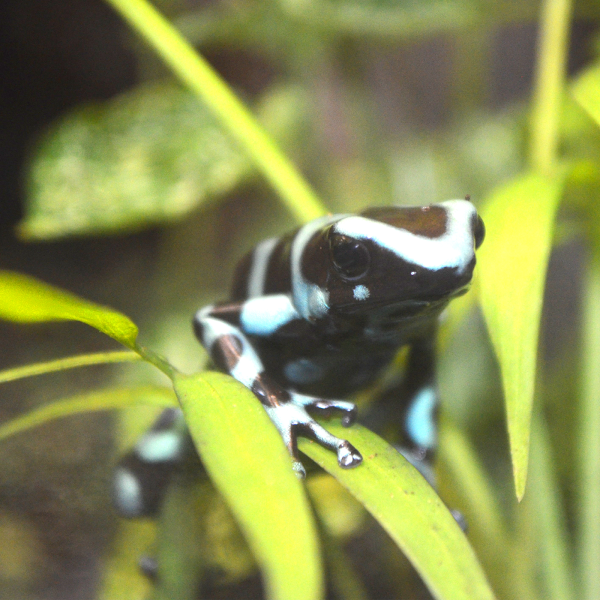 These frogs get the name “poison dart” because indigenous people would use their toxic secretions on the tips of blow darts.

Adults are found on the floor of rainforests. They prefer locations near water sources where the tadpoles live.

Green and black poison dart frogs were originally found in Central and South America from Nicaragua to Costa Rica to southeastern Brazil and Bolivia, though today they are also found on the island of O’ahu, Hawaii due to human introduction. Yellow-banded poison dart frogs are found in the neotropical region of Venezuela, northern Brazil, Guyana, and southeastern Colombia. Dyeing poison frogs are found in the northeastern area of South America in French Guiana, Suriname and Guyana.

Poison dart frogs are carnivores who eat spiders and small insects they find on the forest floor, such as ants and termites. Prey is captured using their long sticky tongue, as well as their excellent eyesight.

Poison dart frogs are considered “threatened” by the IUCN Red List. This status is due to the fast decline of their natural habitat. They are also becoming a popular species in the pet trade because of their attractive colors and their ability to adapt.