Mantella frogs are tiny, poisonous frogs that can be found in a wide range of colors—gold, blue, black, bronze, green, orange and yellow, just to name a few. These eye-catching colors serve as a warning that mantellas are poisonous. Though they are not closely related to other poison frogs, developed similar adaptions to other species in their niche. This is known as convergent evolution. Not all species are equally toxic, though. Some may make a predator sick while others may only secrete enough to taste unpleasant. Since many poisonous frogs share their brightly colored skin, it can be difficult for predators to tell exactly how toxic the frog is, offering protection for even the less toxic species.

Mantellas are diurnal and hunt during the day when their warning colors can be easily seen by predators. With only a few exceptions, mantella frogs are land-dwelling. Unlike most other frogs, who have webbing to help them swim, mantellas live on land and have sticky fingertips designed for climbing trees and short legs made for crawling around in leaf litter. Due to these physical differences, they cannot jump as far as other frog species. Specifically, many poisonous frogs live on land, are brightly colored, and are active during the day.

Mantella Frog at the Akron Zoo 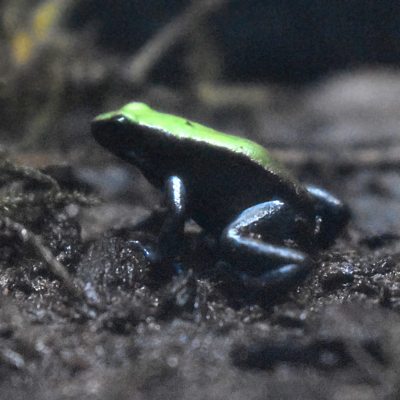 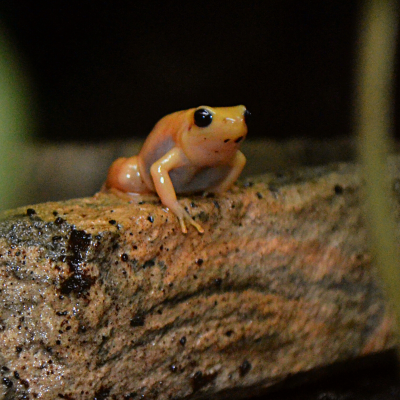 The zoo is home to several species of mantella, including golden mantella and blue-legged mantella. Both species can be seen in our nocturnal animal building micro exhibit, found in Legends of the Wild. 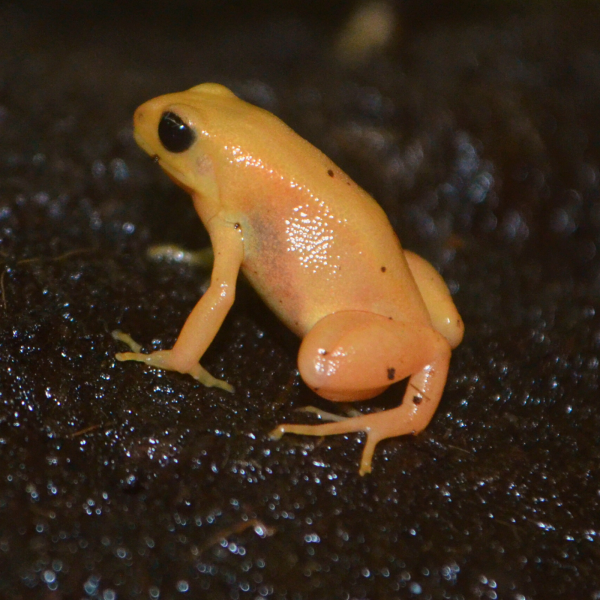 Mantella frogs secrete alkaloid toxins which are created from the food they eat in their native habitat. Interestingly, many frogs in human care lose their toxicity because they are fed a different diet.

Many mantellas live in swampy forest habitats, seasonal streams and wet canyons. They prefer to live where there is abundant leaf litter, rock crevices and vegetation.

Mantella are only found on the island of Madagascar, off the coast of Africa.

Mantellas are insectivores who use their sticky tongues to catch termites, fruit flies, ants, and other insects. At the Akron Zoo, mantellas will eat flightless fruit flies and pinhead crickets.

There are eleven species of mantella listed as “endangered” and decreasing by the IUCN. As amphibians, mantellas are particularly susceptible to pollution and climate change in their environment. Because they absorb water through their skin, they take in large amounts of pollution from their environment, which can be fatal. Droughts, fungal disease, habitat destruction, collection for the pet trade and competition with humans over land have also had negative effects on the population.