The mountain chicken frog gets its name from the locals who first discovered the species, claiming its meat tastes like chicken. This species is also commonly called the giant ditch frog. As one of the world’s largest frogs, mountain chicken frogs can jump up to six feet high, easily soaring over the heads of many adult humans.

They are nocturnal, meaning that they sleep during the day, typically hiding in leaf litter or under rocks to avoid predators. These frogs become active at night to hunt, playing a vital role in the ecosystem as they keep the number of small animals and invertebrates under control.
Since the islands they inhabit also lack native mammal species, they are actually the top predator on the islands, apart from humans.

The mountain chicken frog can be found in a wide variety of colors, from chestnut-brown to barred or even spotted. Their sides and stomach are orange-yellow with black markings and they have large eyes with dark pupils and a golden iris. Their bodies are robust, with large heads and well-muscled legs. Male mountain chicken frogs are often smaller than their female counterparts and can be identified by a black 'spur' on each of their thumbs. 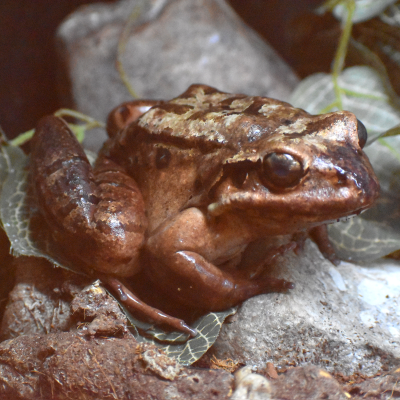 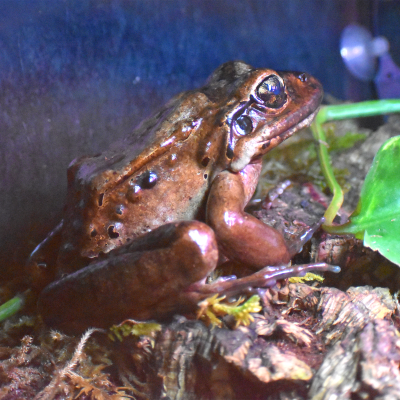 Our mountain chicken frog can be found in Komodo Kingdom.

Dominic is currently the oldest mountain chicken frog in the world! 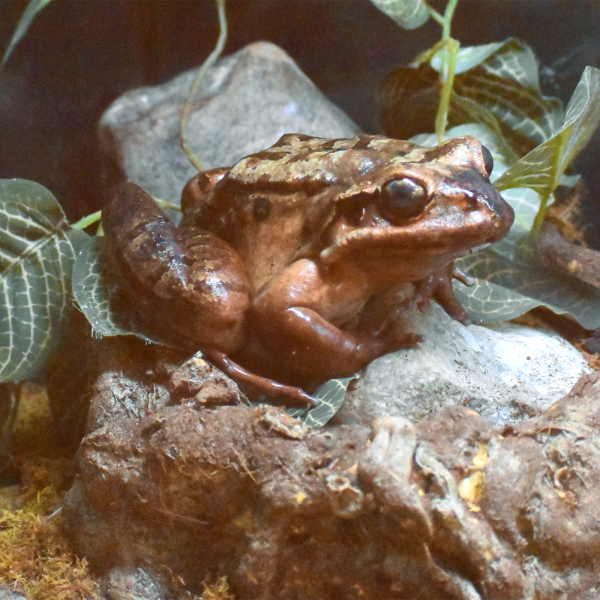 The mountain chicken frog is one of the largest species of frogs in the world. Adults can grow to be more than eight inches long and weigh as much as two pounds.

The species lives in dense vegetation, ravines, and flooded forests. They prefer lower elevations, from sea level to about 1300 feet above sea level.

Mountain chicken frogs were once found throughout the Caribbean Islands, but today they can only be found on the islands of Dominica and Montserrat.

Mountain chicken frogs are opportunistic eaters. They will consume nearly anything they can swallow whole, including insects, snails, spiders, centipedes and occasionally even geckos, snakes or other frogs.

Mountain chicken frogs are classified as “critically endangered” by the IUCN Red List, with fewer than 150 individuals estimated to remain in their native habitat. Their population continues to decrease due to a fungal disease called chytridiomycosis, which has killed more than 80% of the population, along with several other species of amphibians worldwide. Other threats to the population include habitat loss, a decrease in annual offspring, natural disasters in the area and hunting by locals for consumption.